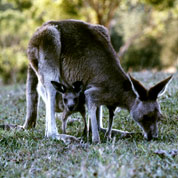 Reproductive success in eastern grey kangaroos is high with a short green grazing lawn. These are of high quality and often floristically diverse and not indicative of ‘over’ grazing.
(Image Copyright: Jan Aldenhoven)

The Code of Practice says joeys can be ripped from their slain mother’s pouch and hit on the head with a water pipe or iron bar until dead; shooters even bash joeys against their vehicle or a tree trunk.
Older, ex-pouch, but still dependent joeys, flee in terror when their mothers are killed to die from cold, starvation, predation and maternal deprivation. A million or more joeys die in this way every year.

Most shooters will not allow themselves to be filmed killing joeys.

The Code of Practice is not linked to the Prevention of Cruelty to Animals Act and is legally unenforceable.

Contrary to public perception, the RSPCA does NOT monitor or police cruelty to commercially killed kangaroos.

The nature and method of slaughter cannot be ignored, it is barbaric and inhumane. Each night thousands of animals are butchered, many are maimed, the pouch young are cruelly dispatched and the young at foot are left to fend for themselves. Any reasonable person would not wish to be a party to this slaughter by purchasing kangaroo products.
Former Senator George Georges (Queensland) heard evidence about kangaroo killing for three and a half years as Chairman of the Senate Select Committee on Animal Welfare from December 9th, 1983 to June 5th, 1987. (Preface of “The Kangaroo BETRAYED!).

The cruelty and suffering that we have already seen in the native animal industries mean that this is no longer an experiment. Hundreds of thousands of kangaroos each year are not killed humanely, emu chicks in Western Australia are de-toed without anaesthesia to reduce risks to handlers, and possums in Tasmania are trapped, transported and killed over a period that now has blown out to anything up to 48 hours. The trade in wildlife is a trade based on profit, without any place for compassion. (Foreword of The Kangaroo BETRAYED! Professor Peter Singer)

Kangaroos are shot in the Australian outback by spotlighting at night. One million joeys die alone. Three aspects cause great cruelty:

Because headshots are attempted, these may not strike the brain but injure the head including the mouth. These kangaroos escape into the scrub outside the spotlight’s beam and will die over several days from their horrific injuries and starvation.

In-pouch joeys are killed by stomping on them or bashing them with a stick or against a vehicle. Several blows may be necessary.

Ex-pouch joeys are still reliant on their mother s milk for protein, warmth in the cold winter’s nights, protection from predators, and they are dependent on their mothers for support. They spend time in and out of the pouch and when their mothers are killed, they are left to fend for themselves, many starve to death.

Video evidence is available in the ABC documentary ‘Kangaroos – Faces in the Mob’ and the explicit cruelty in the International Fund for Animal Welfare film of Greg Eichner, NSW shooter – farmer. The kangaroo killing and game meat lobby can no longer conceal the extreme brutality of their trade. For years we have been calling for an end to this industry which causes the lingering death of 1,000,000 joeys. These joeys similar to the joey ‘Jaffa’ in ‘Faces in the Mob’ are orphaned when their mothers are shot in the so-called ‘harvest’. (Dr John Auty)

All decent Australians should become active in calling upon Federal and State politicians to outlaw this trade – a trade as horrible as the slow slaughter of whales and the clubbing to death of seals or any of the other terrible abuses of wildlife around the world.

Aside from the cruelty which is inherent in the commercial kangaroo killing industry, one landholder in Western NSW has described ‘pitting’ which is the digging of pits to bury kangaroos that have been killed illegally. These same landholders want to legally increase their income by skin only shooting which is crueller than the carcass trade. They can shoot the kangaroos inhumanely as long as the skin itself is not damaged for the export markets and it is not detected (impossible to police).

Skin only shooting is not only more cruel but it is also open to many illegal cases of abuse. The NSW NPWS fought a Court Case in 1996 to stop this trade and won. Now the landholders have friends in political circles who they are lobbying to reopen the skin only trade in NSW. Kangaroos are killed primarily for their leather and skins. Many millions of kangaroos are killed for the shoe leather trade to Italy and the USA.

NSW farmers have threatened to use political pressure to get what they want (that is, less kangaroos). The welfare of kangaroos is only paid lip service and is the scapegoat for falling prices and incomes. A Tibooburra, NSW farmer (1999) found over 139 kangaroos dead in his front garden from poisoning (the killing is not policed). NSW landholders want kangaroos to come under the control of the Department of Agriculture and taken away from the NSW National Parks and Wildlife Service and they are using their political clout to ensure kangaroo numbers are reduced to tolerable levels, which may be zero numbers of kangaroos.

Ignore the $6 billion nature-based tourism industry
The kangaroo killing industry supplies leather for soccer cleats, handbags and baseball mitts, which is fueling the slaughter of millions of kangaroos and their babies every year. 6.9 million kangaroos will be shot this year – it is the biggest wildlife massacre in the world and it must be stopped.

Adidas is far and away the leader in ‘premier’ soccer cleats, with 70 percent of the market worldwide by heavily marketing its highly-priced, kangaroo-skin, ‘Predator’ football boots around the world. Headline stars such as David Beckham encourage the brutality by wearing and promoting Predator boots.

It is vital to the survival of kangaroos that we stop the trade of their skins, especially for the manufacturing of soccer cleats. According to Australia’s leading tanners of kangaroo leather ‘Parker Tanning’, manufacturers prefer to use the largest skins to make athletic footwear. These skins come from the large red males who take 10 years to reach alpha status and are being continually massacred only a few survive to pass on their superior genes to the next generation. This means that smaller, weaker and younger males are left to breed with the females, producing offspring who are less likely to survive a major drought or other natural disasters. We must reverse this trend before a major disaster strikes and Australian kangaroos are wiped out! It is frightening that leather suppliers are complaining that there are few large red males left in Australia. Skins are getting smaller and smaller as they now shoot juveniles.

WILDLIFE AND ECO-TOURISM HAVE TREMENDOUS NATIONAL WEALTH AND JOBS POTENTIAL

The kangaroo is a universally loved icon yet millions, now declared a resource, are slaughtered to accommodate destructive agricultural practices.

It is time for the tourism industry to maximize on the already established international reputation of the kangaroo as a major tourist icon.

Australia’s leaders hide behind a protective wall of propaganda and irresponsible legislation, so that a few may gain from the death of a species.

Australia has one of the highest rates of extinction in the world but there appears to be no shame, only apathy about this appalling record.

The world community and the Australian people are told that kangaroos need to be killed for damage mitigation. This is a total misrepresentation of the truth, which is consistently propagandised by both Federal and State Governments. The official policy of Environment Australia is: “Australian native wildlife is a renewable resource. If managed in an ecologically sustainable manner, wildlife can provide a perpetual source of economic benefits for all Australians”.

Myth: Plagues of kangaroos? Australia overrun by kangaroos?
Fact: Kangaroos were widespread and abundant at the time of early settlement. Now they are fugitives in their own country and Skippy is relentlessly pursued.
Myth: Kangaroos degrade and destroy the environment.
Fact: The soft padded feet and long tail of the kangaroo are integral to the ecological health of the land as regenerators of native grasses. It is destructive agricultural practices on marginal land that are proving to be unsustainable.
Myth: We need to kill and eat our wildlife to save it. Wildlife must ‘pay its way’.
Fact: It is imperative that we link wildlife corridors throughout Australia to restore kangaroo and wildlife habitat. Tourists want to see tourist icon Skippy… but kangaroos are being decimated and the outback is turning to dust. The ecological and economic value of wildlife nature-based tourism is ignored.

There is a breed of scientist who supports the escalating slaughter and is giving scant attention, if any consideration to the extreme cruelty, inherent in the kangaroo killing industry, except to pay it lip service. They have commissioned the RSPCA to tell us what we already know, that this is a brutally cruel industry which is impossible to police, and leaves behind a million or more dead joeys every year.

They are incapable of addressing the fate of the ex-pouch joeys, which are still dependent upon their mothers for survival, escaping to face a lingering death, when their mothers are shot.

They dismiss the repugnance demonstrated by the international community of kangaroo killing, of stomping on joeys or bashing joeys to death.

We are witnessing a carnage of unsustainable proportions for commercial gain. Populations are being reduced to alarming levels in many regions and the species is subjected to ever-increasing kill quotas.

The more kangaroos that are killed, the more profits are made and so the cry goes out to kill more and more.

Red kangaroos are a threatened species
Red kangaroos are now being killed at a rate three times higher than they are reproducing. In the 1960’s, their average age was 12; today it is 2. Their average weight was 35 kg in the 1960’s, which today is 18kg. Commercial killing has put insupportable pressure on Red kangaroos which now threatens the species.
The Australian scientific community is ignoring the most basic premise of sound objective science by turning a blind eye to the killing of the biggest and best kangaroos, designed by nature to maintain a healthy gene pool and their biological fitness.

“We need to know the effect of the slaughter of large male kangaroos on the future viability of the population, especially as the industry is now calling for the right to slaughter smaller and smaller animals all the time”