AWPC Speak Out Against the Culling of Kangaroos in Cape Schanck

In October 2017 the Australian Society for Kangaroos were contacted by a neighbour of a property owner that was to use an Authority to Control Wildlife Permit (ACTW, cull permit) on Eastern Grey Kangaroos that were accessing his land at Cape Schanck on the Mornington Peninsula. He asked the organisation to help with trying to save the kangaroos.

In communication with ASK, the AWPC went to inspect the property with the cull permit and found some alarming inadequacies with the fencing, weed and rabbit control. All of which would appear to be contrary to good land management practices.

The property is bordered on one side, across a small dirt road, by the Mornington Peninsula National Park where there is an abundance of kangaroos. The fence alongside the National Park has been vandalised with 4 large holes cut out, presumably by someone trying to allow the kangaroos access back onto the land. The kangaroos are indeed accessing the land via the holes in the fence. DELWP consulted an Independent Panel of Experts (IPE) who advised the owner NOT to fix the fence because it was likely it would just be vandalised again. So now it seems that DELWP’s solution to criminal vandalism is to cull native wildlife.

The property owner claims that he intended to use the land for horse pasture and horse training but with the kangaroos eating grass and spooking horses he has incurred ‘substantial financial losses’ to his business with the kangaroos being there.

But why are landowners setting up a horse training facility on land that is known to be abundant with kangaroos?

With large holes in the fence, it would be impossible to contain horses on the land. There is also an overgrowth of invasive sweet vernal grass, which is toxic to both stock animals and kangaroo, some of which is spread into the National Park reducing the natural grasses the kangaroo rely on to eat. Rabbits are hopping around and burrowing into the ground on and around the property, which begs the question, how does the landowner and/or DELWP attribute grazing food being lost to kangaroos and not rabbits?

The fences in the area are in a terrible state and fence wire is strewn on the ground on public land, posing a great hazard to kangaroos as they go about life in their natural habitat.

Why is DELWP giving out cull permits to landholders who clearly are not maintaining fencing, failing to properly manage their land for weeds and rabbits and are actually causing unnecessary hazards and suffering for wildlife? The balance is completely in favour of the human economic and/or recreational benefit and once again the wildlife loses.

[Read the first article about this case here:]

The fencing was ineffective because it was vandalised with holes.

The AWPC were happy that another article was run in the local newspaper and was happy to raise awareness about the case.

I received the following reply: 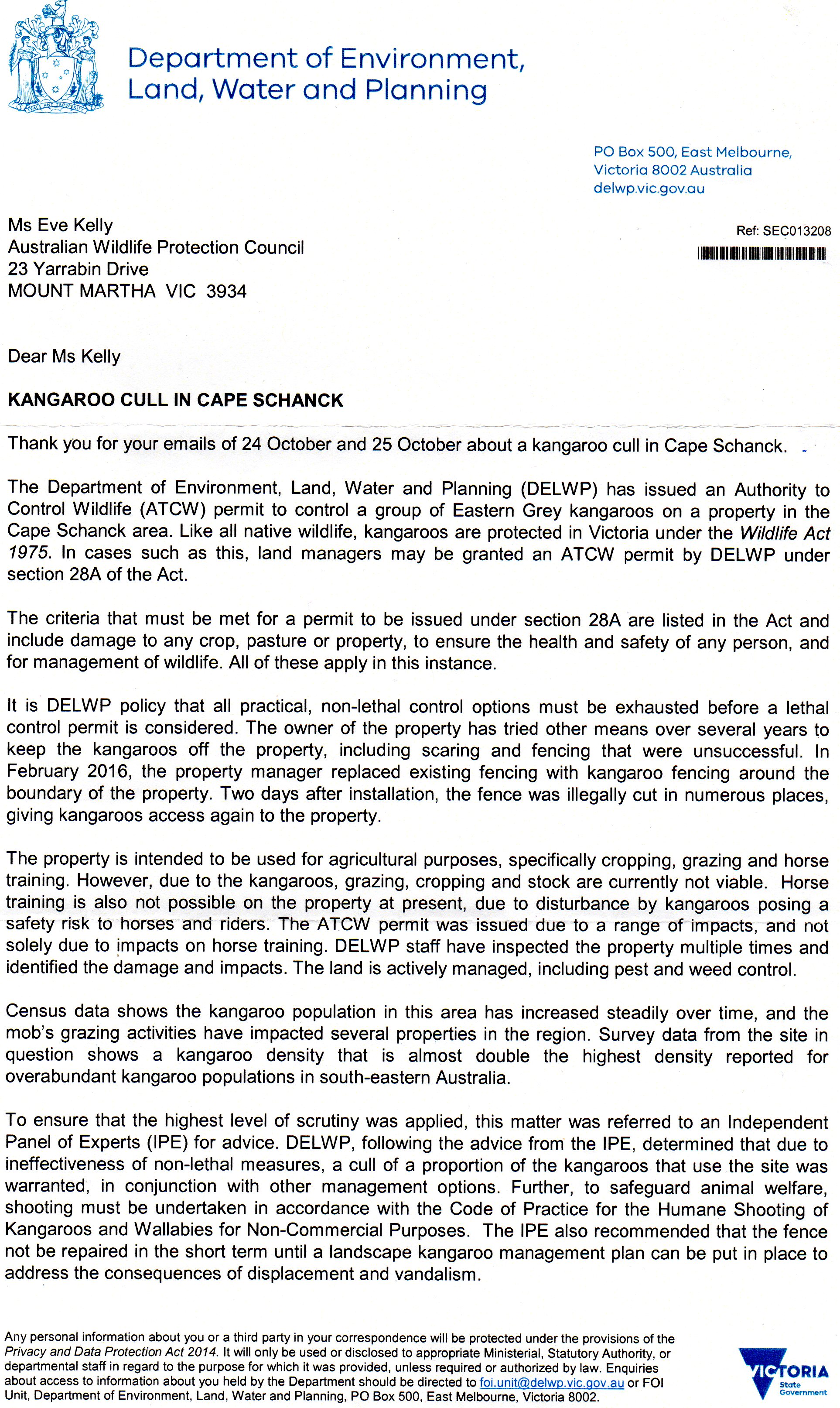 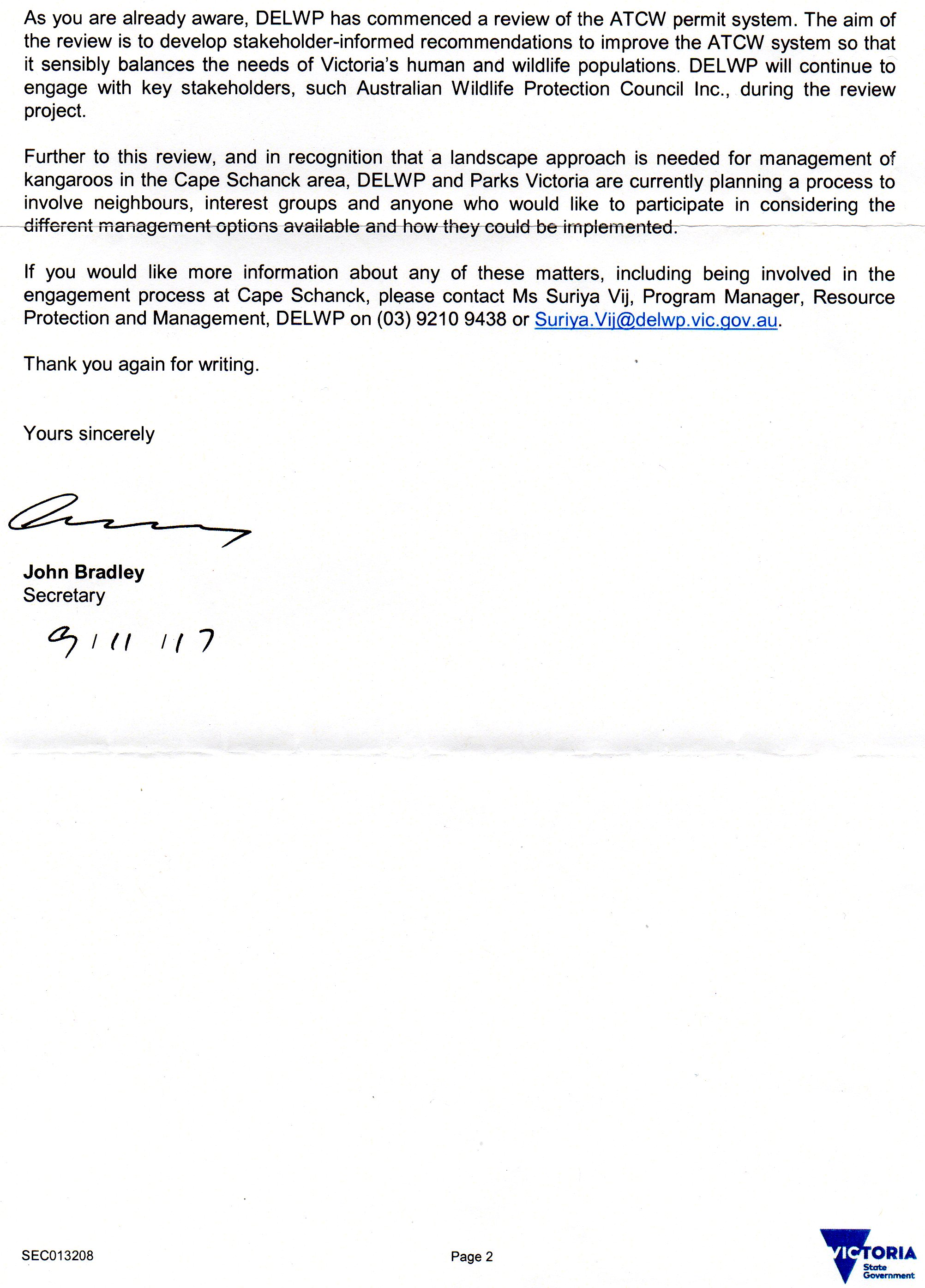 The AWPC will be attending the meeting which is expected to be held next year. In the meantime, we are still in communication with DELWP about this particular permit and also involved in the ATCW Review that is set to begin in the near future.