We join Sara Tilling and Gary Henderson once more, this time Sara talks about grief and loss and rebuilding the future from the caravan that is to be their temporary home. There is an impassioned thank you for the many of you from around the world that have given the support and kindness that will make a new future possible.

“Like us, all living creatures don’t want to die and will fight to survive. Sometimes despite all odds we hang in there, not yet ready to leave for many reasons. Maybe just because you find someone that is prepared to sit with you, love you and give it their all to help you. To give you the strength to fight.”
— Sara Tilling

The money donated to the Cobargo Wildlife Sanctuary will be spent on rebuilding the wildlife care and rehabilitation infrastructure and equipment, compounds, sheds and the like. Money will also be spent on revegetating the property with the native plant species that will help to give the animals who come to live at the sanctuary in the future, the very best chance of a happy and successful life. There is a vast amount of work to be done.

You can assist in this work by donating HERE.

NOTE: Why it is critically important to donate to people and organisations working on the front line of wildlife rescue and rehabilitation in Australia.

Sara mentions the attitudes of governments in Australia to wildlife and conservation. What has occurred over the last few days is telling. Some good, some very bad.

The Commonwealth Government of Australia (Canberra) has pledged $50 million to assist wildlife in the firegrounds across this vast continent. The states most impacted at this time are New South Wales (Cobargo), Victoria, South Australia, Western Australia and Queensland. The $50 million in funding will be split between an expert advisory panel and community groups and Koalas will be a focus for restoration efforts, with as much as 30 per cent of Koala habitat destroyed. We shall see what happens.

In New South Wales, where some 8.5 million hectares have been destroyed and whose current government’s attitudes to wildlife conservation are nothing less than egregious appear to be planning on businesses as usual with no changes to lax wildlife laws or the level of commercial or other permits being issued. “DPIE will be monitoring fire and harvesting activity within the commercial management zones and will be engaging with commercial harvesters and animal dealers that may operate within the affected zones,” the spokesperson said. “Our goal is to ensure that Kangaroo populations remain ecologically sustainable.” 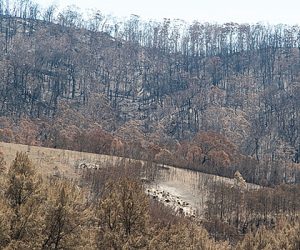 In Victoria, the Victorian Government, although details and how these are to be enforced are vague, has suspended its relatively new and doomed Kangaroo Pet Food Industry. The commercial wildlife industry in Victoria is doomed because much of the populations of species being exploited are now gone because of the large numbers of animals killed in the last few years. As far as I can tell the Victorian Government has no plans to put a stop to the vast scale culling of wildlife it claims to be a nuisance or overabundant. In Victoria in the ten-year period 2009-2018 inclusive a total of 32,147 of these ATCW permits (not commercial) were issued for Australian species covering 1,513,605 animals across 82 native species including for 26,507 Wombats, in addition Wombats are unprotected in much of the state and killing them does not require a permit. This Government describes Koalas as overabundant (nonsense).

While not formally announced, the Victorian Government (its Ministers) have also flagged their intention to proceed with this year’s Duck shooting season despite the devastating impact on waterbird populations in Australia from heat events, long term and severe drought and now the horrific fires. South Australia has already announced that despite the devastating fires it will proceed with its Duck shooting season.

Too little too late

An area not that much smaller than Greece, has been destroyed in Australia over the last few weeks and because the firegrounds are so vast, the wildlife that does survive is in immediate danger of starvation and dehydration, all food has gone, and water sources, if they remain, are contaminated. The Australian Veterinary Association is desperately calling on the Victorian Government to airdrop food into inaccessible, bushfire-affected land in Victoria to save starving wildlife.

“Victorian Environment Minister Lily D’Ambrosio said the Government was taking expert advice to get the best outcome for native wildlife and biodiversity. “We’re considering supplementary feeding for threatened species in targeted areas if and when it’s appropriate and safe to do so,” she said.

As President of the Australian Wildlife Protection Council I have called on the government to stop all wildlife killing activities and to begin food drops with immediate effect. Towards the end of 2019 it looked to me, with all the disasters and potential disasters that we describe here, that the Victorian Government were ‘culling’ wildlife in state and national parks in Victoria. The response I received beyond the usual spin was as follows:

“If you require any more detailed information at this stage, we encourage you to submit your query through our Freedom of Information Process”.

Something to hide perhaps?

Australia’s ABC report that “Animals Australia director Lyn White said some species in fire-affected areas were critically endangered such as the mountain pygmy-possum and brush-tailed rock-wallaby found in Gippsland. The charity offered $100,000 to the Victorian Government last week to help purchase food, but said they have not received a response to the offer”.