CANBERRA: signalling ‘pest’ to massacre national icon — achieves nothing but suffering. It must stop! 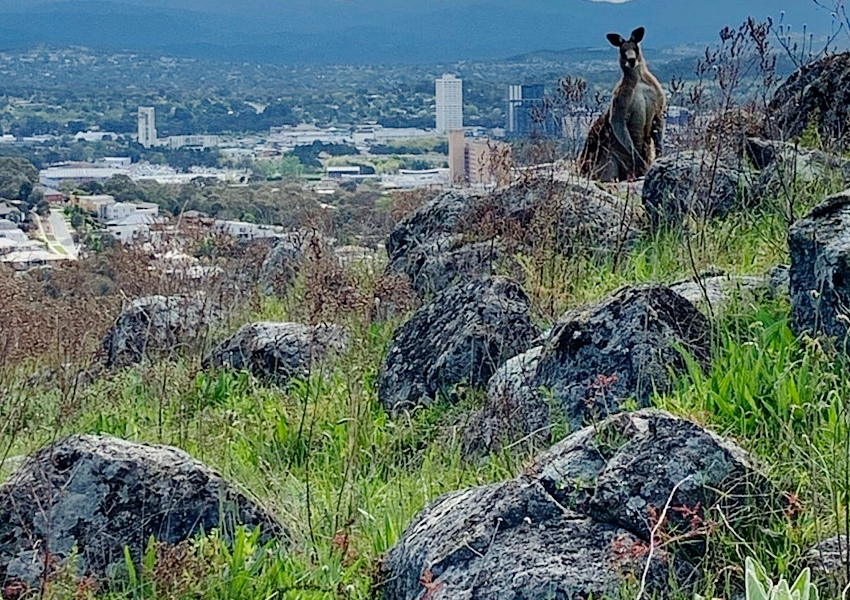 cA GROWING COMMUNITY of concerned ACT residents, including ecologists and many other scientists, animal lovers, nature lovers, wildlife carers, public servants, and people who simply live near Canberra’s suburban reserves, are demanding a stop to all killing of kangaroos in Canberra, and a public inquiry into the full impacts of this annual slaughter.

Every year since 2009 (inclusive), over the winter months, the Australian Capital Territory (ACT) Government sends hired guns to stalk Canberra nature reserves at night. In 13 years, across 11,400 hectares of the Canberra Nature Park, 31,595 Eastern Grey kangaroos have been killed, with an unknown number of local wallabies also killed in the assault.

That number for kangaroos does not include the thousands of pouch joeys that have been bludgeoned to death or decapitated. Thousands more dependent at-foot joeys have been orphaned to slower death.

These numbers may seem minor compared to the scale of commercial and “management”-motivated kangaroo killing nationwide. However, the ACT’s annual massacre has set three disgraceful and dangerous precedents, which governments across the country have begun to echo and emulate.

By law, pouch joeys are bludgeoned to death. Death is supposed to be delivered by a single blow to the head but, in the real world, with a terrified, struggling animal, this is virtually impossible to achieve. Most at-foot dependent joeys escape this treatment. But their fate is also cruel.

Numerous eye witness accounts, as well as the testimony of a government- nominated “expert”, have confirmed that entire ghost populations of at-foot young are left orphaned by the ACT’s slaughter every year. These babies die slowly of hypothermia, dehydration, starvation (they still depend on their mother’s milk), and myopathy (a particularly painful and deadly form of stress). The lucky ones are killed by cars or taken by foxes. Possibly one in a thousand is successfully (albeit illegally) rescued in time to save its life.

Wounding, rather than instant head or heart shooting, of many targeted adults is also inevitable. Shooting often takes place in wet, foggy or windy conditions, when the chance of wounding rather than instant killing is extremely high. Additionally, ACT shooters use red dot sights to target their victims. Red dot sights have been found to be subject to point-of-aim deviation and to be especially inaccurate in cold weather (the time the government’s shooting in the ACT is taking place).

The killing destroys not only the individuals killed. It destroys the entire family structure of the mob. Kangaroos are highly social animals that depend on family and mob relationships for every aspect of their wellbeing. Survivors are emotionally traumatised by seeing their families and everyone they have ever known killed violently before their eyes.

Kangaroos fleeing the shooting routinely collide with cars on the high-speed roads that surround Canberra’s nature reserves. The lucky ones are killed instantly. The unlucky ones die slowly of their injuries. Other fleeing kangaroos impale themselves on barbed wife fences that surround many of the reserves, an unimaginably slow and painful death.

The science said to back “conservation culling”

Independent research, including research funded by the ACT government itself, provides no evidence that kangaroo grazing has ever harmed any other native species, native ground cover, or ecosystem, as claimed by the government and its in-house advisers.

In fact, other research suggests that the ACT natural environment benefits from sustaining kangaroos at their normal regional levels in their ecosystems (i.e. an average one to three kangaroos per hectare) compared to the quota of one or less kangaroo per hectare said to be the government goal with their annual killing.

Many errors have been identified in the government’s claims of a scientific basis for the slaughter. These errors include:

Canberra residents and ratepayers opposed to the slaughter of native grazers on the nature reserves of their city point to clear evidence of negative environmental and social consequences:

So far, ACT politicians and their advisers have consistently pushed back against proposals to welcome Canberra’s macropod marsupials for their biological and eco-tourism benefits.

The snapshot in this table, looking at two recently-‘culled’ reserves, illustrates systemic problems in the ACT’s kangaroo counting methods that drive government ‘overpopulation’ narratives to the public.

Kangaroo biologists and independent ecologists report that kangaroo populations do not grow faster than about 10% per year. **

The low population growth rate is a result of: their slow breeding (only one joey per year), breeding age (not until females are nearly two and males are about five), gender distribution, length of gestation, length of lactation, average natural lifespan, cessation of breeding when food is scarce, and normal juvenile mortality rate.

The ACT has attempted to explain these impossible population increases as “inward migration”. However, since the factors that limit kangaroo population growth to about 10% per year apply to all kangaroo populations, there is no logical explanation as to where these big mobs of kangaroos might be moving in from. We know that every year after the government’s “cull” kangaroos from the surrounding land gradually increase their range to include the emptied reserves. This does not represent a population increase, just the natural movements of fast-moving, wide ranging grazing animals.

The ACT Conservator estimates populations using the Walked Line Transect method, counting kangaroos in a segment of a reserve and extrapolating the number counted to the entire reserve. This is an extremely unreliable approach to counting large numbers of highly mobile individuals. The ACT government does not conduct direct counts except on very small reserves (presumably to save on labour costs) but instead relies on the cull calculator.

This legislated kill calculator relies on estimates (guessimates?) to determine how many kangaroos to kill. If population growth rates and kangaroo numbers are exaggerated, and cull targets are based on an inflated estimate, then clearly this annual killing is putting kangaroo populations at grave risk in reserves where culling occurs.

Save Canberra’s Kangaroos is a group of concerned Canberrans who have spent many hours over many months recording numbers and locations of kangaroos in the nature reserves.

Nowhere have these ‘citizen scientists’ been able to find kangaroos in the population densities claimed by the ACT Environment Directorate.

tagged with Stop a horror trade