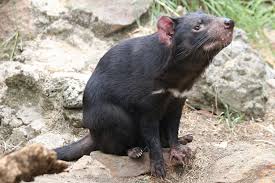 The facial cancer in Tasmanian Devils is spread from devil to devil via biting during social interactions and has caused massive population declines of Tasmanian devils since its first sighting in 1996.  No doubt these vicious “social interactions”, or poor table manners, are not new, but part of their long-term, evolutionary behavior!

Deakin’s Centre for Integrative Ecology researchers found that natural antibodies in the marsupial’s immune system might prove game-changing for the animal’s facial tumour disease and open up the possibility of a vaccine and treatment options.  “Certain natural antibodies are able to recognise and kill cancerous cells, so we wanted to see whether the presence of these molecules would also determine tumour development in Tasmanian devils,” Dr Ujvari said.

Dr Ujvari said this gave rise to hope of a vaccine and treatment options that could halt the spread of the rare communicable cancer that has decimated devils in the wild since its first detection in 1996. 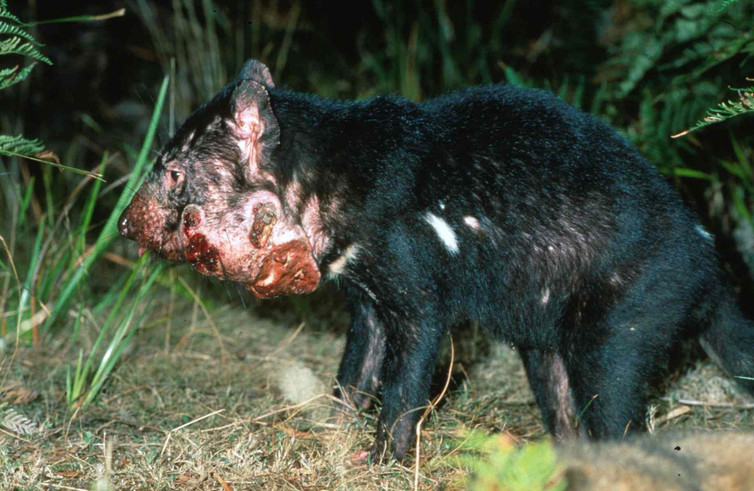 But scientists say there’s another, less well-known, threat to the Tassie Devils.   It’s believed that the animal got their name from their blood-curdlng sound – but that’s not what they are fighting against!  The threat that’s reversing years of hard scientific work, in an instant: roads.

Tasmanian Devils have been the subject of roadkill! Over the past six months, 49 healthy Devils were released into the wild but at least 17 have been killed by motor vehicles.  If a wallaby or possum is killed on the road, then unfortunately that’s a food source for Devils, so that will attract Devils onto the roads at night.  So the problem of road kill is accumulative – one animal tragically gets killed, and then another is killed by being lured by the flesh on the road.

About 1,000 are killed around the state each year.

Devil populations have been diseased for an extended period of time and are now at such low numbers that losing a couple of individuals can have a severe impact on that population.

A high-tech alarm system (or virtual fencing) (Dec 15) has been deployed in Tasmania’s far north-west in a bid to stop Tasmanian devils being killed on the roads.  The electronic system aims to prevent animals crossing the road when a vehicle is approaching at night.

Alarm units positioned about 100 metres apart are triggered by headlights, emitting a loud alarm and a flash of light.  Over an 18-month period, 49 animals were killed inside the fenced area, compared to 275 outside. 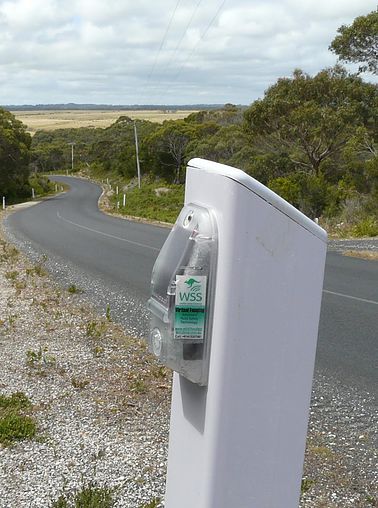 The system also worked to protect motorists. The device has been used extensively in Europe but the Arthur River site is the first trial of the technology in Australia.

There are plans to trial the device at other roadkill hot spots in the state.

So far Tasmania is the only state or territory to trial the technology, which has been brought to Australia by Wildlife Safety Solutions and is currently in use at three sites around the state, with a fourth trial about to start in the south.

Tasmania is the world’ roadkill capital! More animals are killed per kilometre of road in Tasmania, than anywhere else in the world. We move further and further into the wildlife’s habitat each and it results in building infrastructure like houses and roads and the result is dead animals on the side of the road!  This is not “progress”, but shameful to Australia – and Tasmania.

On average, Tasmanian human population has been growing by 2,000 a year. The State Government is hoping to increase the state’s population, which was at 515,000 as of September 2014 to 650,000 by 2050.   That is an extra 4,000 people every year!  So, while native animals are facing massive losses from traffic, governments are more interested in injecting human fuel into the economy – as a substitute for productivity and optimum use of natural/human resources.