This scientific study into the endangered Growling Grass Frog was released overnight and looks at how the genetic diversity of the frog is being negatively impacted by the rapid urbanisation of Melbourne’s fringe. They were once very abundant in Victoria (so abundant that they used to feed them to the snakes the Melbourne Zoo!) and now only a few populations exist around Melbourne.

The scientists have found a population of the frogs in the Cardinia Shire, which has an increased genetic diversity that they hope to protect.

Claire Keely, the lead scientist on the paper, is both a PhD student and part of the Live Exhibits team at the Melbourne Museum (where they have some of the pretty green frogs in question).

A paper by scientists from Museum Victoria and The University of Melbourne has today been published in the Royal Society of London Open Science journal. It describes how the Growling Grass Frog’s genetic diversity is being negatively impacted by rapid habitat loss as Melbourne’s urban fringe continues to expand. 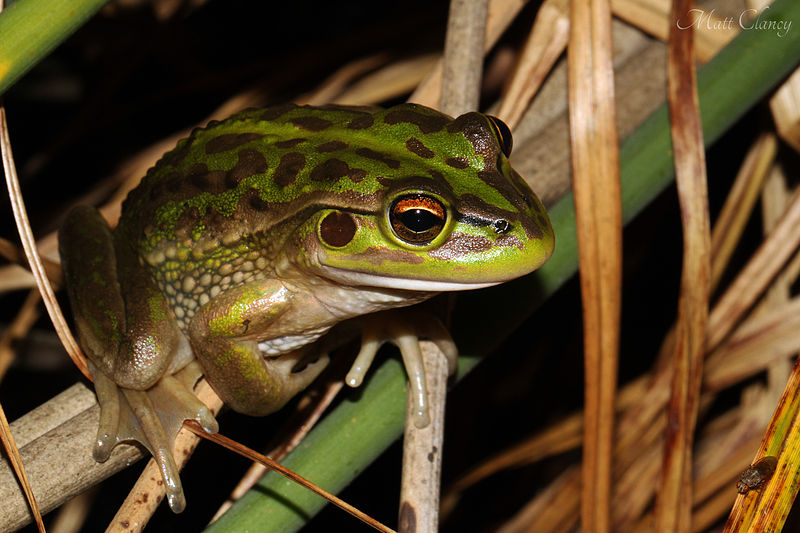 Urbanisation is a leading cause of species extinction worldwide and is considered a major threat to global biodiversity.

The Growling Grass Frog is listed as vulnerable to extinction in Australia, but isolated populations still persist in the greater Melbourne area. Many of these populations are located in the city’s proposed urban growth area, causing concern as the species is known to be sensitive to habitat fragmentation caused by urbanisation.

The study found that there is decreased genetic diversity in the remaining populations found in Wyndham, Melton and Hume-Whittlesea, making the frogs more prone to inbreeding and less able to cope with the threats posed by urbanisation. The scientists have also found that populations in the Cardinia Shire, one of the four regions studied, are genetically distinct.

“Genetic diversity is key to maintaining the population of Growling Grass Frogs in Victoria as it makes them more resilient to the threats posed by urbanisation. If they are to survive in greater Melbourne the population found in Cardinia will require separate conservation management,” said Claire Keely, PhD student, Museum Victoria and The University of Melbourne, who led the study.

This study demonstrates the importance of genetic research on vulnerable species and can be used to inform conservation efforts to maintain populations.

The team are currently looking to gain further funding to extend the study into the Gippsland region in order to find out more about the frog species genetic diversity and how the Cardinia populations are related to those further east.

The Growling Grass Frog is one of the largest frog species in Australia. They are found in south eastern Australia and were once so abundant in Victoria that they were used for dissections in universities and to feed the snakes the Melbourne Zoo.

For interviews, images, video footage or to meet a Growling Grass Frog at the Melbourne Museum please get in contact.