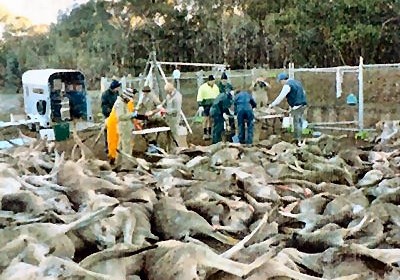 “Harvesting, damage mitigation and culling probably actually accelerate population growth in roos because the smaller ones survive and adapt by sexually maturing earlier – which speeds up fertility turnover.

Since 2003 DNA studies have shown that ACT and southern NSW roos, both male and female, migrate at significant rates and for longer distances than the ACT model assumes. Migration has probably been mistaken for fertility, rendering ACT roo counts unreliable and invalid. The ACT needs to stop culling and widen its research base to consider various genetically based algorithms that naturally restrain fertility opportunities in kangaroos.”

Examples of such algorithms include separate gender pathways, with ‘sexual segregation’ where male and female populations live apart. It is likely that the stable presence of mature dominant males and females in family and mob organisation inhibits sexual maturity and activity as has been shown in studies of other species, such as macaques and superb fairy wrens (the latter cooperative breeders). In humans, girls brought up with step-fathers who came late to the family were more likely to mature sexually earlier due to absence of Westermarck Effect.)”

“The ACT’s senior Ecologist, Donald Fletcher, found in his Phd that local kangaroos lived without damaging pasture or starving at densities of 5 per hectare, yet he had supported the ACT program that deems kangaroos at more than one per hectare to be in danger of starving and a threat to their own habitat.”

The ACT government in Canberra is pursuing a policy of rapid human population growth, mostly through publicly invited economic immigration, yet it blames kangaroos for being crowded out of the suburbs.