Nothing is im-paws-ible for these crime fighters

DETECTION DOGS are employed by the International Fund for Animal Welfare — or IFAW for short — to help sniff out crime and corruption. This detective (pictured above) known as Yellow Boy — has been enlisted in Benin, in West Africa.

He aids human anti-trafficking officials by smelling out ivory and pangolin scales. Yellow Boy and his canine colleagues often contribute to the eventual arrest of illegal poachers operating in the region. 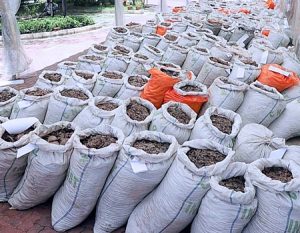 Authorities in Singapore seized over 14 tons of pangolin scales estimated to be worth about $38.7 million on April 3, 2019. Photo: Singapore Customs/National Parks Board.

The illegal wildlife trade is the world’s fourth largest illicit industry, following drugs, arms, and human trafficking. Pangolin scales and ivory are often destined for Asian markets where they are used as ingredients in traditional medicines, while turtles and elephants are also widely poached. Research indicates that a hunter captures a pangolin in the wild once every five minutes, adding up to more than a million taken over the past 10 years. These detection dogs play a crucial role in the fight against illegal poaching.

The young adult canines are trained for six months, while puppies are trained for 10 months, before they can be deployed to sniff-out wildlife crime. Once the dogs have completed their training they are sent to ports, airports, border crossings and to the boundaries of protected wildlife habitats.

It’s not all work and no play however; the dogs get a home, long play-times with their human handlers, and high-quality food. The handlers are also given comprehensive training to help them provide the dogs with excellent care and help them fit into the community.

IFAW believes this is one of the best examples of what their organization stands for: bringing individual animals and humans together to protect entire species on the brink of extinction.

If you would like to support IFAW’s Detection Dog Project you can make a donation by following this link.