Our stories of living with wildlife, tell us yours 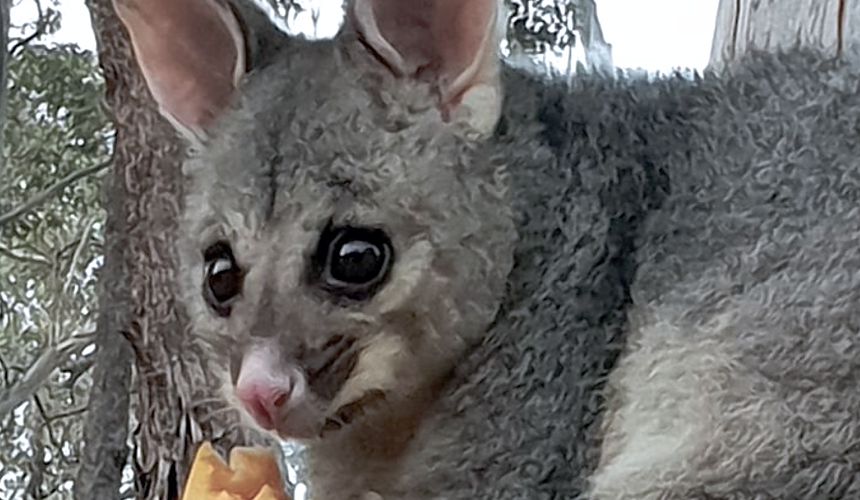 WITH THE UNPRECEDENTED times we are living through — drought, fire, flood, hail, linked to climate change, now plague linked to humans eating wildlife, all the while governments continuing to encourage exploitation and ‘harvesting’ of wildlife — we wonder how we can help our animal brethren, just in our own lives. Especially if we are locked down and restricted to digital communications.

Around our block in NSW and at my neighbours’, all semi-rural land, we have maintained some heart-warming, voluntary friendships with our local wildlife. The birds, the possums (main image), the kangaroos and wallabies, Shingleback lizards, we talk to them and, yes feed some through the tough times (and just because we are softies), and they respond without fear and flight. Nothing is caged or restricted. Anyone rural or suburban can be that kind of sharing friend. 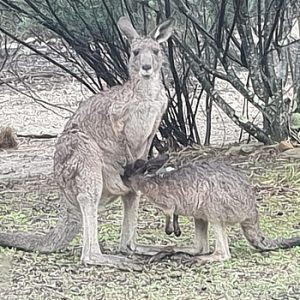 Last night, our matriarch Eastern Grey Kangaroo, whom we just call Old Mum as distinct from Young Mum and her joey (seen on right) who all hang out together, followed me around the block like a faithful doggie. We went and inspected some new green grass coming up in a valley below the house. She watched me for a while and then went up the hill and gathered the rest of her mob and brought them all down for a look and, I suppose, the possibility of a feed.

Interestingly, they soon showed less interested in the new grass than in the re-growth Red Anther Wallaby Grass on the hillside. A Red Neck Wallaby was nibbling around the grass edges. We have gotten to know the wallabies better during the drought. Notably a fearless Swamp Wallaby who was coming close and looking expectant, with sweet potato, carrots, brown rice and fruit his reward. He has since gone back to post-rain native vegetation it seems.

Same diet minus the rice for the omnivore possums. Shinglebacks like tropical fruit skins. Getting humans to share a handout is a good survival strategy.

The rice was originally cooked for a posse of bush floor Choughs (look like 12 Apostle Birds) whom the drought had driven, for the first time in our memory, close to the house. Other bush birds — Rosellas, Magpies, Bronzewing Pigeons, are frequent visitors as are the occasional Sulphur-crested Cockatoo at ours and a whole flock at my neighbours. Bird seed of course is the attraction plus occasional broken nut meat for the larger birds.

A lovely flock of Gang Gangs comes in for water but never looks for a food handout. They feed on the gum nuts high in the trees. Black cockatoos have been attracted to nearby pine trees, but we saw less of them this disastrous summer. We worry about the small insect-eating birds (and the tree frogs) with the dearth of insects in our bushland and around our homes now. Plantings for nectar feeders help those.

Young Mum Eastern Grey has been taking good care of her joey for six months now and the joey (we think a girl) is still feeding from her, sometimes on the lawn. It’s interesting to see that at times joey hangs out with ‘Nanna’ ie Old Mum and follows her around. No doubt she has instructed both her daughter and her grandchild that humans can be friends and sources of help and food.

As soon as the weather improved and the rains came in, the kangaroo males, who had been fed during the bush-fire and drought, dispersed. They have returned to their usual circuits and smaller mobs here and there, still enjoying the occasional handout. We want to keep them close and away from roads and other dangers. The girls stay much more fixed to home range.

If you have some ‘good news’ personal stories to tell, and ways of helping wildlife (that does not involve gatherings of more than 50 people!) — we would love to hear from you and publish your anecdotal reports and observations.