Flocks of Carnaby’s Black-Cockatoos winging their way to their evening roost sites has been a familiar sight around Perth for decades. Their days are numbered!
Updated research from BirdLife Australia shows that flocks are getting smaller as the population of these large, white-tailed, black-cockatoos declines each year.

600 people took part in Birdlife Australia’s Great Cocky Count, earlier this year, but the minimum number of Carnaby’s Black-Cockatoos recorded in the Greater Perth–Peel Region was 5518 birds, continuing the drop in numbers from previous years’ counts. Records have shown a significant, ongoing decline in their population, a reduction in flock size as well as fewer occupied roost sites around Perth. 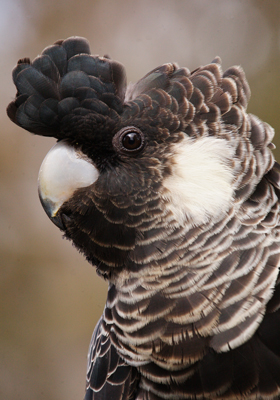 This is not an evolutionary trend, due to climate change or other environmental trends, but deliberate habitat destruction! “Perth suburbs continue to expand into the bushland that traditionally supported black-cockatoos. So the black-cockatoos moved into the pine plantations for food and shelter, but now these plantations are being cleared and not replaced.” Thanks mainly to ridiculously high immigration levels, the human population continue to swell, and the deadly threat of urban sprawl spreads like the metastasis of cancer!

Perth’s deadly urban sprawl is heating up the metropolitan area and driving out native animal species, according to an Environmental Protection Authority report. The EPA said species that were present at the time of settlement had disappeared from the region, including 12 mammals such as the numbat, while 46 bird species were in decline and many plants were threatened with extinction. Between 2001 and 2009, some 6,812 hectares of natural bush were cleared within the Perth metropolitan region alone.

Perth’s human population grew by 2.5 per cent in the 12 months to June 2014 – an extra 48,400 people – with 2.02 million people now calling Greater Perth home. New plans mapping out locations to develop 800,000 new homes in Perth and Peel to accommodate for a future population of 3.5 million have been released by the WA Government. The cost of “progress” ignores the environmental costs, and the loss to native species!

Perth’s urban sprawl could be stopped if some of the city’s open space including parks and gardens – is sacrificed for housing! There’s never the option of slowing down our population growth! The pressure is to make the city “more compact”.

Half of Perth’s bird species have suffered declines since European settlement. Department of Parks and Wildlife senior wildlife officer Rick Dawson said at the time that 85 Carnaby’s Cockatoos had been killed on the road in eight weeks – a major blow for a species that’s declined from a wild population of 150,000 to between 20,000 and 60,0000 in 30 years.