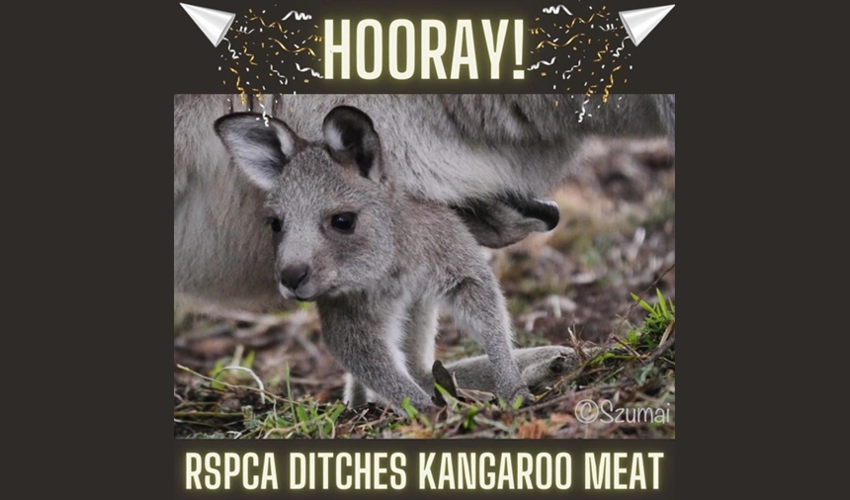 IN EARLY OCTOBER 2022 mainstream media reports announced a major win for a citizen campaign led by wildlife advocates in Victoria and other states. The issue: destruction of kangaroos to benefit some agricultural businesses and to supply the voracious commercial pet food trade.

Reported the Herald Sun: “The RSPCA has pulled kangaroo meat from its pet food shelves amid animal welfare concerns and how the products were sourced.

“The Victorian branch of the society was selling a range of roo-based food products for dogs as recent as last week but has now removed them from sale.

“The RSPCA was under pressure from native wildlife groups who say Victoria’s culling of roos — 119,000 last year — was cruel.”

“The state government introduced the Kangaroo Harvesting Program in Victoria in October 2019 to shoot Eastern and Western Grey kangaroos for pet meat production.

“This year until the end of June, almost 40,000 roos have been killed.

“Tens of thousands of the macropods are also killed every year by property owners under the Authority to Control system.

The Victorian Kangaroo Alliance which was active on this Victoria-focused campaign, congratulated the animal rescue organisation on its website, writing:

“We are delighted to announce that RSPCA Australia have made the decision to remove kangaroo products from their stores NATIONWIDE due to their concern about animal welfare in the kangaroo industry.

“A great number of individuals and organisations came together to raise our concerns with RSPCA and we are pleased that they have rapidly responded so positively. We thank them for listening and acting, and thank all those who contributed to this fantastic outcome.

“Let’s hope other stockists like Woolworths, Coles, IGA, Petbarn and Petstock (to name but a few…) will follow the example of the RSPCA and ditch cruel kangaroo meat.”

tagged with Stop a horror trade