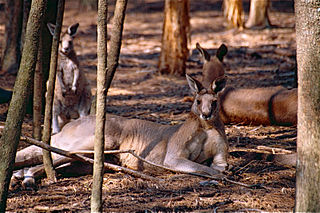 Five star luxury resort Sanctuary Cove on the Gold Coast have elected to use lethal means to manage the Eastern Grey Kangaroo population, despite having used a non-lethal management program for the past 10 years which has shown good effect in reducing the population. Instead, they have chosen to opt for slaughtering the kangaroos in order to curb the population growth of Eastern Greys at Sanctuary Cove.

Surely Sanctuary Cove boasts the beauty of the Australian bushland as they show a picture of two kangaroos on their website home page. so how do they justify the culling of our much-loved native symbol? Is this ironic, or hypocritical, that they use this world-famous symbol to lure tourists to their resort?

Sanctuary Cove however, have failed to maintain the program as often as it was needed and have now opted to take the unethical approach of culling up to two-thirds of its 300-350 population.

Sanctuary Cove has ignored expert veterinary advice, as well as animal and environmental advocates’ calls for non-lethal methods to be used, and has instead opted to take the unethical approach of the cull. Sanctuary Cove states that they are only targeting the sick, old, injured and aggressive.. this is a lie!

Kangaroos on Sanctuary Cove precinct on the Gold Coast are highly valued by residents and visitors. Sanctuary Cove have been provided with an ethical solution to the manage the population. The initial culling of 100 Eastern Grey Kangaroos (with more planned) is cruel and unnecessary.

Concerns have been raised that the indiscriminate culling will have significant ramifications for the intricate social and family structures of the kangaroo mobs, and may result in a further increase in kangaroo-human conflicts at the resort.

Sanctuary Cove has failed to demonstrate that non-lethal methods are ineffective. Please sign the petition to call on the Minister for Environment to immediately withdraw the Damage Mitigation Permit. This is a cultural and attitude problem, not an environmental one!

Please sign this Petition to let the Sanctuary Cove management know that this is not acceptable.