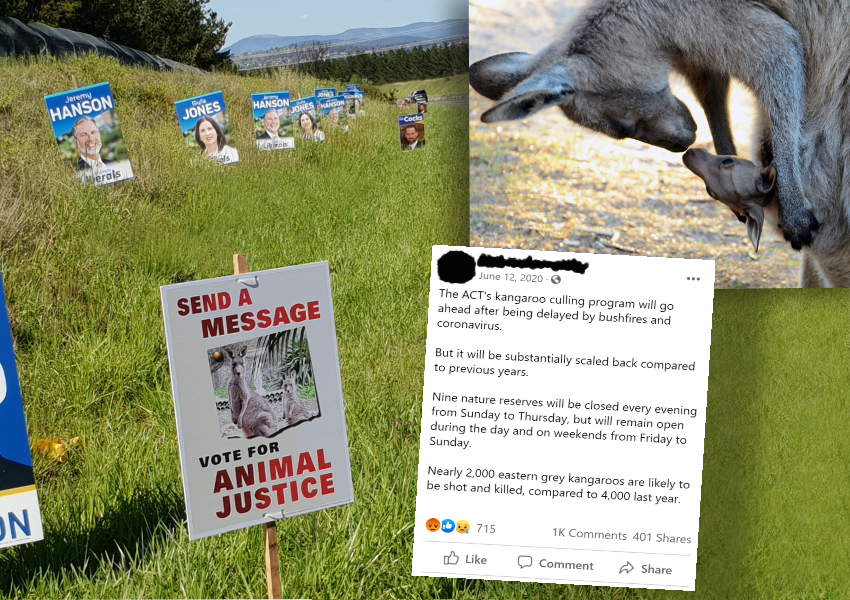 Remnant mobs in old Canberra wiped out: recruitment down

THE AUSTRALIAN CAPITAL Territory (ACT) government, for the purposes of its annual kangaroo massacre, always wildly overestimates the number of kangaroos present on the urban reserves of the Canberra Nature Park. Consequently, for some years now, there have been no kangaroos left on the reserves after the slaughter; essentially the remnant mobs that survived the construction of Canberra are now entirely extinct.

However, with normal dispersal of juveniles from the ACT’s own national parks, along with refugees escaping from the open slather persecution now underway in surrounding NSW, kangaroo populations have always reappeared in the reserves just in time for the next year’s carnage.

Because of the fires last year, this recruitment from outside did not occur at its usual scale in 2020, and many of the kangaroos that did arrive were weakened and vulnerable due to sustained hunger after the fires destroyed their former habitat.

This did not stop the ACT government, whose real agenda is apparently the total extermination of kangaroos in the urban areas of the ACT, reporting they had slaughtered 2,000 kangaroos on the urban reserves in 2020. Because of the good rains later in 2020, there are likely to be more kangaroos on the reserves than there were last year by the time this year’s massacre commences, but still not enough for more than a handful to survive the planned 2021 killings.

The ACT government has now signed a five-year contract for the ongoing annual slaughter with what is essentially a paramilitary outfit “Strathbogie Wildlife”.

Since 2013, there has been tri-partisan support (Labor, Liberals and Greens) in the ACT Legislative Assembly for the annual slaughter. A recent development stemming from last year’s election is that there are now six Green members in the 25 MLA-strong Assembly (there is no upper house). The local Greens’ membership is deeply divided on the kangaroo issue — between those who have been conned and those who have bothered to look at the science and the documented facts.

Animals advocacy groups operating in the ACT (the Animal Protectors Alliance, the Animal Defenders Office, Animal Liberation ACT, the Animal Justice Party of the ACT and with information support of AWPC) are planning to focus our lobbying on the new Greens MLAs urging them to withdraw their support for the cruelty, violence and ecological vandalism of the current kangaroo killing policy.

Since the annual pogrom began in 2008, the local media (except for the District Bulletin which is based outside the ACT) had refused to publish any in-depth coverage of the issue, while publishing the ACT government’s evidence-free propaganda for killing kangaroos as if it were gospel truth.

Consequently, the other strategy animal advocacy groups are planning for this year’s slaughter is to find ways to bypass the mainstream news media with less reliance on the often-closed circuit of social media: more of a street presence, letterboxing, drive-by advertising, and out of reach signage especially outside reserves that are closed for shooting.

Anyone who is willing to help with these activities, or to join those of us who annually engage in direct protect and rescue actions at the actual reserves, will be very welcome.

ACT government’s shameful war on kangaroos thankfully over for 2020

THE ACT GOVERNMENT has proudly claimed that it murdered 1,931 Eastern Grey Kangaroos during it 2020 annual slaughter program. APA (Animal Protectors Alliance) considers it highly unlikely that anywhere near 1,931 kangaroos were killed on ACT reserves this year.

“It is far more likely that, if this figure is anything other than a complete fabrication, most of the killing was conducted on private property,” spokesperson, Robyn Soxsmith notes.

Many reserve observers have noted that there were nowhere near 1,931 kangaroos present on ACT reserves prior to commencement of this year’s massacre. Furthermore, throughout the seven weeks of the slaughter, no more than 200 shots were recorded on the south-side reserves (Callum Brae, Isaacs Ridge, West Jerrabomberra and Mugga Mugga), by watchers who were positioned well within hearing range of any shooting, every night of the massacre.

Ms Soxsmith speculates, “It is extremely likely that most of the killing occurred on local farms. This would be a win-win solution for the ACT government and the farmers. The farmers get all their kangaroos killed at taxpayers’ expense, and the government saves face for its preposterous estimates of the number of kangaroos present on ACT nature reserves”.

“It is of course a lose-lose tragedy for the kangaroos, the environment, and all the other residents of the ACT,” Ms Soxsmith adds.

Wherever the killing took place, and however many were murdered by this barbarous ACT government policy, innocent animals had their lives blown away, families were shattered, untold pouch joeys were bludgeoned to death, and untold at-foot joeys orphaned to die of starvation, dehydration, exposure and myopathy. All this cruelty is in accordance with the government’s hypocritically named “National Code of Practice for the Humane Shooting of Kangaroos and Wallabies for Non-Commercial Purposes”.

“What was not in accordance with even that disgustingly inadequate code of practice is the shooting that took place on Isaacs Ridge Reserve in heavy fog on 24 June, where many blood trails and blood puddles were found the following morning, and the shooting that occurred on Callum Brae Reserve on 14 July in 45 kph winds,” Ms Soxsmith notes.

The government also claims, as it always does, that the slaughter was carried out to reduce the impact of the kangaroos on other native species and to manage overgrazing in grassy habitats around Canberra.

This assertion has been well and truly debunked by the CSIRO research which shows that: