Caring for wildlife homes in the city 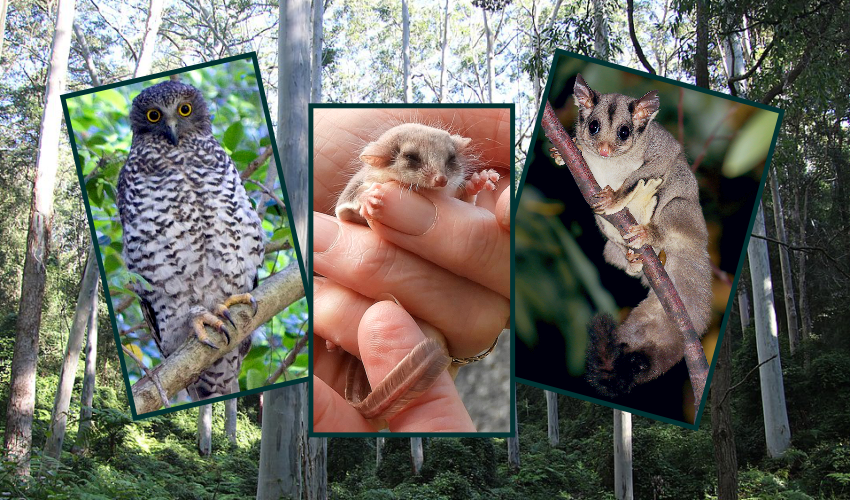 Sydney wildlife carer Katrina and neighbours have been battling a big Australian land developer who proposes major removal of remnant native habitat important to a slew of Australian native species still surviving in the city. The aim is to construct more human habitations. This Sydney battle plays out again and again in Australian towns and cities and for other profit-making development pursuits. Here is their story and a call for reader action to contact Hills Shire and Hornsby Councils and ask them to abide by minimal wildlife protection standards in planning and development consents.

“ON THE 27TH October, there will be a State Planning Panel to review three Development Applications submitted for a precious forest in West Pennant Hills, the ex-IBM site at 55 Coonara Avenue.

These DAs are seeking approval to remove 1,877 mature trees to construct houses and apartments. The developer, Mirvac, has already removed 1,253 trees, many of them the Critically Endangered Ecological Communities (CEEC’s) of Blue Gum High Forest and Sydney Turpentine-Ironbark Forest.

This photo shows what the demolition stage has done to this endangered forest.

This site is home to raptors and over 40 other bird species, Sugar Gliders, Feathertail Gliders, Microbats, Eastern Pygmy Possums, echidnas, reptiles, Brushtail and Ringtail possums, as well as Powerful Owls that breed nearby in the Cumberland State Forest. This is a hotspot of biodiversity yet it’s being lost for housing. It’s heartbreaking.

There is increasing pressure on urban forests with many developers hungry to build and with development being ‘fast-tracked’ as a result of the pandemic. Across NSW, residents are witnessing the loss of remnant forests, the last bastions of ‘green’ in our towns and the last refuges for our native animals.

As a wildlife rescuer, it is particularly heartbreaking when we see the fall-out from this habitat loss …

there is a direct correlation between loss of trees and animals reported to us in distress. Furthermore, what is more worrying is the lack of protection that is evidenced on development sites. They are bulldozing our wildlife yet all native wildlife in NSW is nominally protected by law.

It has become apparent that there is a problem. An exemption in the Biodiversity Conservation Act offers a ‘defence’ against harming a protected native animal (which is an ‘offence’ for everyone else in NSW) and that defence is if you have ‘development consent’.

That’s where a Fauna Management Plan (FMP) comes in. It’s not a requirement for all development sites, but it is sometimes requested as a last line of protection for our wildlife when development is impacting on areas where there is known to be high density of wildlife.

No standards for wildlife plans unlike for heritage or waste

However, you will be surprised to find out that there are no standards for writing one, and no requirement for them to follow any codes of practice. They are written by ecologists who are employed by developers and approved by local councils.

There are standards for many operations on development sites — heritage, waste, soil contamination — but no standards for what happens to the birds, mammals, reptiles and amphibians that are living on the site. These FMPs vary greatly in quality and many are failing our wildlife and not giving them enough protection.

This issue has recently come to the attention of our MPs and councillors and questions were recently asked by the Hon. Mark Pearson of AJP in Parliament. He questioned why there are no minimum standards, and why there is no oversight of FMP’s apart from at local council level.

Someone must take responsibility for the injuries and deaths that are occurring when wildlife habitat is being cleared for development. Wildlife rescuers and vets follow stringent protocols and NSW Codes of Practice for every animal that they interact with — it is a condition of their licence.

Yet, on development sites, these same animal welfare standards do not apply.

This was subsequent to Cate Faehrmann, Greens MP, putting forward a Motion in Legislative Council back in July to introduce standards for Fauna Management Plans, and to put in place protocols for protecting our wildlife on all development sites. The Motion was blocked.

Now, at a local council level, we are hoping this issue can be raised again and not so easily dismissed. The volume is rising and we must ensure greater protections are put in place. It is not ok for our animals to be crushed, dropped, displaced and to starve because of development happening around them. There must be integrity and there must be standards applied. Animal welfare must be a priority for all development impacting our precious native animals.

There is strong community opposition to the loss of bush and tree canopy at the moment.

The issue of formalising a mountain biking trail network in Westleigh is raising the question of whether this should be considered when there are Critically Endangered Ecological communities being impacted, and in turn, impacting on the wildlife that it supports.

NSW Government is also proposing to formalise networks of MBT trails in our National Parks. At Fred Caterson Reserve in Castle Hill, local council is proposing the removal of over 600 mature trees for sporting fields — with artificial turf at that.

It’s happening everywhere, all around us, and we must ensure our wildlife is given the utmost protection possible when development is removing their homes from under them.

Speak for the voiceless

For that very reason, we must keep fighting for our wildlife. We are their only voice.

Please write to Hills Shire Council and let them know that Mirvac must do a further Fauna Management Plan for the next 3 DA’s they are seeking approval for that will be removing over 1,800 trees (DA’s 859,860,861/2022/JP) and against the development at Fred Caterson Reserve. Do the same for Hornsby Council — write to the councillors and let them know your concerns on how the wildlife will be impacted when the endangered forest at Westleigh Park is not protected from mountain biking trails in the forest.

Katrina reports: We have just had some good news — the Fauna Management Plan Motion put forward by Hornsby Council has just PASSED today at the LGNSW Conference — and it passed unanimously! Which means no councillors voted against these reforms.

Let’s hope State Govt now takes these issues seriously and makes changes to ensure wildlife on development sites is not just bulldozed like they are at the moment.