The above research shows that the public believe commercial harvesting is an acceptable form of kangaroo management, as long as it is done by professional and skilled shooters, and the carcases are used rather than wasted. The suffering of kangaroos must also be minimised, and the most humane methods used. 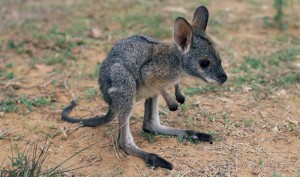 This noble sentiment, and lofty aim, is to “improve” the image of the commercial kangaroo industry, the biggest terrestrial wildlife industry in the world. It’s a recognition that the public are concerned about the welfare of kangaroos, especially that of their young.

The authors of a survey of kangaroo harvesters in 1986 stated that “…different shooters are making varied and ill-founded assumptions about the biology and reproductive characteristics of does and the likely survival prospects of orphaned joeys.”

“Harvesting” or shooting at family mobs of kangaroos inevitably means killing and maiming the young, and must be disposed of as the industry’s collateral damage. The young have no commercial value, and must be “humanely” disposed of! At least the authors recognise that the kangaroo meat and skin industry is flawed, and that the public image must be revamped. this research is a recognition that the industry isn’t as “humane” as they promote themselves to be. However, you can’t put lipstick on a pig, and make it glamourous and “humane”, as if the killing was inevitable? It’s damage control, to allow the industry to continue with a “better” public image!

A high number of dependent young are impacted by the killing, approximately 300,000 young at foot and 841,000 pouch young per year (for an average yearly kill consisting of 40% females) . Young at foot have little chance of surviving on their own and it is unlikely that they are killed humanely.

This research is to recommend that kangaroo harvesters need to make a greater effort to locate and euthanase orphaned young-at-foot. Failure to do so will have significant animal welfare implications.

This research supports the methods currently used for euthanasing in-pouch joeys, when done correctly, can lead to a quick and humane death. Harvesters need be trained in the best practice application of these methods.

There is no way to judge that kangaroo harvestors make a “significant effort to locate euthanase orphaned young-at-foot joeys”. The industry is self-regulating, and the killing occurs in remote areas, far from RSPCA or public scrutiny.

The Code states that young-at-foot should be euthanased with a single shot to the brain or heart using a firearm. This is also seen as problematic since dependent young that are out of the pouch when their mother is shot may not be seen by the shooter or they may flee before the shooter can deliver an accurate shot.

The word “euthanise” is used, something that we associate with animal welfare, of releasing sick and injured animals from long and lingering suffering, when they can’t be cured or treated. This “euthanising” is about using less emotive language for what’s really for commercial profits, of coldly disposing of healthy, young in the pouch joeys, and joeys at foot. This isn’t about “animal welfare”, but brutal killing!

In this project, the researchers examined two key issues;

Also, following a recommendation from RSPCA Australia, they trialled the use of a captive-bolt device to determine if further improvements to the welfare of euthanased dependent- young can be achieved.

For unfurred pouch young, decapitation (with or without cervical dislocation) and blunt trauma to the head are unlikely to cause suffering. They are small and vulnerable enough to quickly dispatch!

Blunt trauma to the head can’t be measured, or supervised, in remote areas of the outback, in the sticky heat, the dust and darkness! How accurate are these “blunt traumas” to the head? This brutality is being aimed at our national, iconic and symbolic native animals, not pest cane toads or other feral pest species!

These results indicate that bringing the head into contact with a stationary object, such as the tray of the shooters vehicle, is the most effective method available. Young-at-foot are very mobile and gunshot is the most suitable method for the euthanasia.

So, these young-at-foot foot joeys are very mobile, probably already stressed and traumatized by noise, the loss of their mothers, and being confronted by human predators with firearms! How can they be caught, and constrained, to “bang on the head” with the tray of the shooter’s vehicle? How many times must the joey’s head be in “contact” with the stationary object to “humanely” kill it?

A standard operating procedure that describes in detail how the methods should be applied would reduce or even prevent some of the negative welfare impacts.

An alternative method such as a captive-bolt gun. To date, there have been no studies that explore the use of a captive-bolt gun for the stunning or euthanasia of kangaroos. If a captive-bolt gun is effective in causing rapid insensibility in kangaroo young, it may also have another advantage of eliminating the short but intense period of stress for joeys caused by removing sentient young from the pouch.

The device is propelled by a spring mechanism and developed for use on rabbit-sized animals— is “effective and practical” for stunning in-pouch joeys during harvesting. They don’t have to be removed from the pouch, but dispatched inside the dead mother!

Based on the results of our preliminary trials of the Dick KTBG spring-operated, penetrating captive- bolt gun on in-pouch kangaroo cadaver heads and live animals, at this time we do not recommend the use of this device for stunning or euthanasia of these animals during harvesting. Despite appearing to cause adequate damage to the brain when trialled on cadaver heads, an unacceptable proportion of animals were not successfully stunned with a single shot when this device was used on live animals.

Not surprising that the joeys weren’t successfully stunned with a single shot- they are so small, tiny in fact, and not seen!

So, the industry assumed that the young-at-foot joeys would be moribund, or dead, within (only) three days – when in actual fact they survived for at least 10 days without maternal support, and protection! They died horribly, coldly, lonely deaths, from thirst, starvation and predation! This revelation is an outstanding admission of cruelty, and barbarity. No livestock are allowed to die over days, slowly! This fact undermines any association of the word “humane” with the kangaroo industry!

We observed an increase in risky behaviours by separated young-at-foot, such as an increase in the number of vocalisations, which may alert predators.

These vocalisation are about calling their mothers, which of course would alert predators.

Separated young-at-foot were more frequently the recipients of aggressive acts from others after separation. In particular, adult females would act aggressively in response to an approach by a young-at-foot that was not her own.

There’s laws of the jungle out there, and it’s a vain hope that a mother kangaroo can adopt another’s joey! Limited maternal resources and protection of their own genes determine this.

However, not all approaches to adult females resulted in aggression toward the separated young-at-foot. On two separate occasions, the researchers observed two separated joeys with their head in the pouch of another female.

So, there is some adoptions of orpaned joeys! This shows the strong bonds between members of the mob.

No Shooter will ever allow himself to be filmed killing joeys.

Harvesters …strongly believe that a negative consequence of euthanasia is that they take
away the joeys “chance at life”, especially when they appear to be old enough to survive by themselves.

The RSPCA found that even if young at foot are captured by shooters, there is difficulty in killing them. The Code provides that any dependent young must be shot as soon as possible, yet it is clear that many joeys endure death, pain and suffering each year as collateral of the kangaroo industry.
.
Because of their size, at-foot joeys are assumed to be old enough to care for themselves and survive, but this is not the case. Ex-pouch joeys are still reliant on their mother s milk for protein, warmth in the cold winter s nights, protection from predators, and they are dependent on their mothers for psychic support. They spend time in and out of the pouch and when their mothers are killed, they are left to fend for themselves. 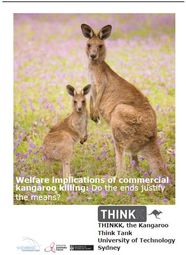 The NSW Young Lawyers Animal Law Committee has proposed that all of the current prescribed methods for killing joeys be replaced with the following requirement:
Shooters must administer lethal injection to pouch young and young at foot whose mothers have been killed. After administering the injection the shooter must be certain that the animal is dead … The shooter must not dispose of the dead pouch joey or young at foot in any manner other than: incineration by fire so that the entire carcass is destroyed or burying the carcass so that the top of the carcass is at least 30cm underground.

Administering such lethal injections would require a specific skill set on the part of the shooters to ensure that these injections are safe. If the procedure is poorly performed, the joeys may experience great pain and suffering. It hardly seems practical or safe for shooters to be supplied with large amounts of lethal poisons for use in remote locations with little or no supervision.

Kangaroos have not been shown to be overabundant in the landscape level and for this reason the aims of three state management programs (excluding WA) have been revised from culling to resource management.

The existing data from RSPCA Australia’s field data and Animal Liberation NSW’s chiller data suggests that many kangaroos are not brain shot per the mandated welfare standard in the Code. Finally the impact of the commercial harvest on the kangaroos’ social systems and genetic integrity has not been adequately assessed.

Do the ends justify the means? THINKK July 2011 final

The results also indicate that the majority of the general public do not like blunt trauma to the head as a method for euthanasing dependent young. However, there is clear evidence that blunt trauma to the head is a humane method of euthanasia for neonates with thin skulls and is currently the best method available for killing furred pouch-young. The jury is out for at-foot joeys! 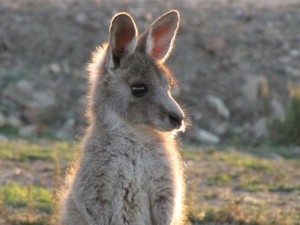