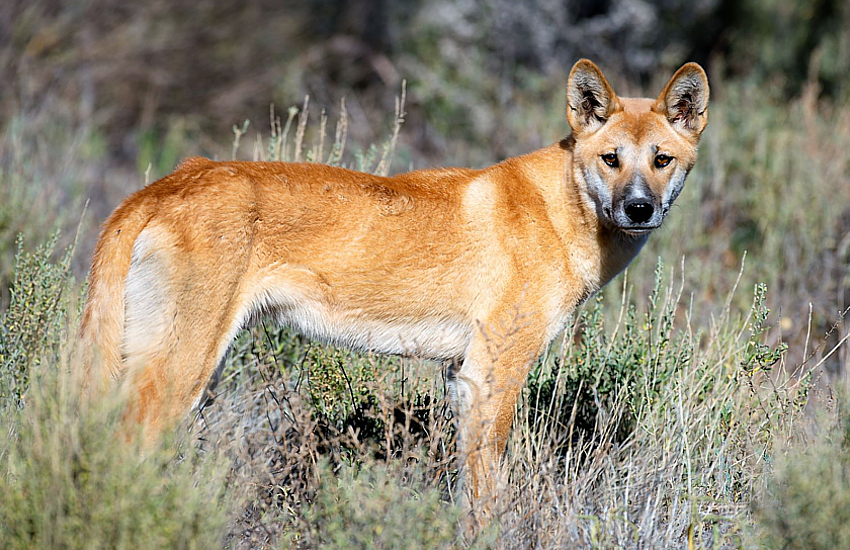 A RECENT MEDIA release in the names of federal ministers Hon. David Littleproud and Hon. Sussan Ley announced: “Over $800k to extend national feral animal coordinators” one of whom is the Wild Dog Management Coordinator through Australian Wool Innovation. The media release goes on to refer to its support for the management of the ‘scourge of pest animals’.

The ‘pest animals’ mentioned include feral animals such as foxes, deer and cats but also so-called ‘wild dogs’ which in this and other similar government publications include Australia’s native dingoes. [IMAGE: Jill Pascoe]

As an example, the NSW Department of Environment and Heritage, in its Wild Dog Policy, describes “‘wild dogs’ (as) all free-living dogs in New South Wales, including dingoes, feral dogs and their hybrids”. This is despite the wealth of evidence that dingoes are:

Archaeological evidence indicates that dingoes were brought to Australia some 5,000 years ago. In the countless generations since then they have adapted to Australian conditions and acquired physical characteristics and skills, absent in domestic dogs, that enable them to thrive, independently of man, in extreme conditions ranging from the ice and snow around Mount Kosciuszko to the desert outback.

Distinguishing characteristics include acutely sensitive hearing and sense of smell, superior speed, agility and endurance. They enjoy great agility owing to very flexible joints and display problem-solving abilities not evident in domestic dogs. The dingo is Australia’s largest land carnivore and, in the wild, they eat kangaroos, wallabies, birds, and lizards as well as feral pigs, rabbits and rodents. (And deter foxes and cats from their territory).

In the wild, dingoes live in family-based packs where only one or a few females are fertile just once a year thus limiting numbers. Usually, it is only the dominant male and alpha female that breed; other members of the pack help to raise pups. These distinguishing and unique characteristics and their long period of geographical isolation mean dingoes are for all practical purposes native to Australia and entitled to be regarded as a distinct species: Canis dingo.

Although dingoes can interbreed with domestic dogs (Canis familiaris), so can wolves and they are regarded as a separate species: Canis lupus.

Not only is the dingo a superb animal, unique to Australia, that deserves admiration and protection, it also occupies a vital place in the natural world on which we all ultimately depend. Dingoes have been filling the role of apex land predator in Australia for thousands of years thus maintaining ecological balance and biodiversity.

Besides keeping an ecological balance with prey macropods like kangaroos and wallabies, a healthy dingo population also benefits smaller native animals because dingoes suppress feral predators (cats and foxes) by predation and also regulate numbers of feral herbivores like goats, deer and rabbits.

The role of dingoes as the apex predator is akin that of wolves in Yellowstone National Park. when they were reintroduced in 1995, they restored balance to the ecosystem by triggering a cascade of animals and plants which included an increase in beaver colonies.

As stated by Josef Lazarow in Dawn of a Dingo Day: “The health and wealth of any ecosystem is directly dependent on the efficiency of its apex predator in that properly regulated predation will positively affect each successive live link.”

Why are dingoes persecuted?

If one accepts that dingoes are native to Australia; have a unique taxonomic status; and occupy a very important ecological role, why are they simply labelled ‘wild dogs’ and subject, with government support and encouragement, to widespread baiting, trapping and shooting? Why are they not granted the same protection that other Australian native animals are given?

The main reason is the influence on governments, federal and state, of powerful agriculture lobbies, particularly those associated with grazing. This has led to governments in south east Australia actively encouraging and indeed requiring the culling of dingoes as wild dogs.

“In Victoria there is a bounty on dingo skins, and in New South Wales farmers are obliged to remove dingoes from their properties. The NSW National Parks and Wildlife Service must control dingoes in national parks adjoining agricultural land.”

Sussan Ley, Minister for the Environment in the current Federal Government attempted in a letter of 12 May 2020 to justify this lack of dingo protection when she wrote “While the dingo has been nominated for listing under the Environment Protection and Biodiversity Conservation Act 1999 on several occasions it has not yet been prioritised for assessment. Therefore, dingoes are not a matter of environmental significance which the Australian government can regulate. State and territory governments make their own determination on managing dingoes to balance recognising their ecological and cultural significance and supporting agricultural activities.”

Far from achieving such a balance, in Victoria there is a bounty on dingo skins, and in New South Wales farmers are legally obliged to remove dingoes from their properties. Furthermore, in NSW, the National Parks and Wildlife Service is expected to control dingoes in parts of national parks adjoining agricultural land.

No doubt there are some stock losses, particularly of sheep, owing to dingo attacks, but are these losses great enough to merit the continuation of the same barbaric killing methods that have been used for years?

Recent extensive DNA Research by Dr Kylie M. Cairns and others from the University of NSW (and reported in Australian Mammalogy) concluded that so called wild dogs in Australia are genetically more than 60% dingo.

They have such a strong genetic line that it has not been interfered with in the same way humans have bred the wolf out of domestic dogs after many years of selective breeding and intervention. Because of this their genes still predominate and scientists, ecologists, dingo enthusiasts and more progressive farmers believe they should be given protection as dingoes, our apex predators, with a vital role in protecting biodiversity.

Zac Forster, Dingo Conservation Solutions, NE NSW Inc writes: “The dingo is intrinsically listed in the deeper fabric of the first people’s spirituality on this land, it features in the creation stories of many tribes from the rugged mountain ranges of the north west to the sweeping coastal plains of the south east. They are spiritual totems to many tribes and are in turn held in highest respect to their corresponding skin families”. If the acknowledgement of indigenous culture given at the start of government meetings means anything, politicians should certainly not condone and encourage the killing of a totem animal.

The author examines alternatives to lethal management and asks:

The case against the dingo is deliberately misleading. Such misrepresentation of an iconic native species is akin to calling a koala a tree rat. What will dingoes be called when the last one of them is in a glass case next to the thylacine, and who will accept responsibility for its extinction?

David Pollock in Western Australia successfully changed from sheep to cattle grazing on large areas of natural grassland and found that dingoes are social animals, and the main risk of any livestock attacks comes from the breakdown of their family pack structure. This can happen when their normal range or habitat is destroyed and mating takes place with farm or hunting dogs.

Progressive farmer Angus Emmott OAM has found that there are advantages in coexisting with dingoes on his Queensland grazing property. He has said the dingoes keep in check the number of kangaroos that would otherwise compete with his cattle for food.

In the book ‘Injustice …hidden in plain sight the war on Australian nature’ — written by Bulletin editor Maria Taylor — a final chapter is called ‘Sharing’ (the land with Australian wildlife). It showcases the experience of conservation farmers and regenerative land managers/graziers who have encouraged and allowed the natural ecosystems of plants and animals to co-exist on their properties, demonstrating economic and environmental benefits. We have excerpted that chapter here.

Such measures may not always be possible particularly for sheep graziers but if one accepts the very strong case for dingo recognition and conservation then steps towards mutual (if separate) coexistence must be taken. Sheep farmers can reduce dingo predation on their stock by using guardians such as maremma dogs and erecting adequate fencing, particularly if their land adjoins a national park. Farmers argue against the cost of saving sheep and cattle from dingo attacks, but the inevitability and cost of such attacks are debatable. There are better and more compassionate alternatives.

Conservationist Dr Lily Van Eeden believes that understanding and integrating public values, and not just those of agriculturalists, shooters, and manufacturers of 1080 poison are critical for more humane animal management. The term ‘wild dog’ is deliberately misleading the general public when it concerns the killing of dingoes.

The future for the dingo? It’s political. The right choice will serve humans too

Australia has one of the highest mammalian extinction rates in the world. Meanwhile, revisions to the Environment Protection and Biodiversity Conservation Act 1999 remain before the federal parliament awaiting consideration by the Senate after the forthcoming election. They will not necessarily give greater protection to our wildlife, unless we pressure the new government to make changes that are real and enforceable and help to save our natural environment.

The Animal Justice Party is advocating for the following changes to be made:

The independent review of the EPBC Act, looking at proposed changes, stated that in order to restore public trust in the way our environment is cared for we need to have binding, enforceable national environmental standards that clearly set out what’s off limits for destruction, and an independent commissioner to monitor the impacts of projects, ensure the law is enforced and that communities are fully involved in decision making.

The truth is that the natural world is changing and we need to fix a broken relationship with our environment. In the words of the late Prince Phillip, “If Nature can’t survive, neither will Man.”