Feeding kangaroo to your pets? Here are some thoughts. 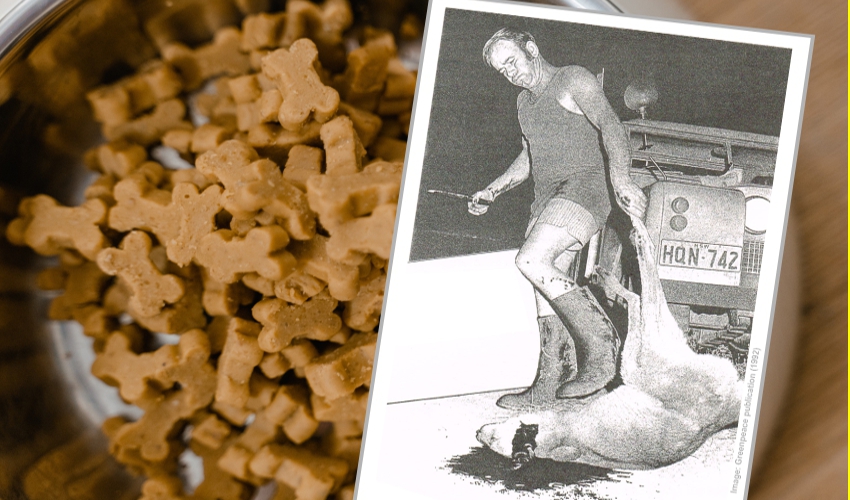 Why do people expect to feed their dogs or cats on Australian wildlife, specifically kangaroo? Are they informed consumers? … aware of the unavoidable cruelty that goes with this trade and of the possible health risks to humans or pets that comes with eating bushmeat? Here are some realities that consumers might want to weigh up.

KANGAROO, IS THE only Australian native animal hunted specifically for the petfood trade. Most meat in petfood comes from offcuts of domesticated animals bred and killed for human consumption. (Remember the shock and revulsion on hearing of racehorses taken to the knackery.)

Australia’s national icon is hunted down in most cases by poorly-paid shooters with few employment choices, who slaughter dozens or hundreds a night at pennies-a-carcass on country properties and increasingly in the wildlife’s last refuges, national parks and reserves. To call this trade or it’s non-commercial version “humane” — as those who enable it like to tell the city folk — is just a self-serving fraud. No independent observers monitor the hunt, the motorised pursuit of terrified kangaroo families, the mis-shots and injuries, with animals at times lingering injured for days; no one helps the totally lost mother-dependent joeys.

No one watches what happens next either. Partly butchered carcasses are hung in the trays of utes in all temperatures for a short or long trip to a chiller in a paddock, where basic sanitation has been questioned in some instances. Eventually the bodies are processed in a town — minced and stuffed into petfood cans, or sometimes butchered for overseas human consumption while the skins are exported as shoe leather.

Victoria, where kangaroo species were recovering after a moratorium on the commercial hunt starting in the 1980s, is now back in business with the kangaroo petfood trade enjoying the state government’s blessing along with applause from some farmers. The advantage of petfood is that any species, size, age or condition animal may do.

The South Australian government, where the iconic Red kangaroo has recovered to an extent, is working on a new removal/ ‘management’ plan. Reports are coming through of wallabies going into the mix too. Half-burned Kangaroo Island is not exempt from these plans we hear.

The question of what consumers know arose with a recent ABC Rural story reporting on Victorian pet-owners, grief-stricken at the death of their dogs who were fed contaminated petfood linked to a Gippsland knackery.  A quoted pet-owner thought they were feeding ‘pure kangaroo.’

These are not the first dogs to die in a widening petfood scandal. The trail has led to outback supplies. Reportedly the toxic content came via cattle and horse carcasses allegedly mixed with kangaroo.

Pet owners are calling for any kind of regulation of the petfood industry. That is long overdue on health and welfare grounds. At the Bulletin we are animal lovers and dog companions and our hearts go out to the bereaved dog owners caught up in this disaster.

Nevertheless, the question remains: how did we and our governments come to consider as ‘normal’ slaughtering our national emblem for petfood, and export sausages and leather?

How is this different from the extensive slaughter of koalas (and other marsupials) for skins to export up until the early 20th century? The fate of the koala is now plain to see.

The disrespect shown to Australia’s national symbol and some other wildlife confuses overseas visitors. Their tourist list is often topped by a wish to see ‘Skippy’ in the flesh. What they don’t know is that all species of kangaroo, that includes wallabies, have (since colonial settlement) been removed from their habitat, killed on behalf of a European model of stock grazing that was to be grafted onto a misunderstood land.

A bounty era of removal was followed by the commercial trade in body parts, starting with skins for export. It grew profitable and developed its own momentum. As readers of the Bulletin know the same attitude of disrespect and killing is a baffling annual event on the nature reserves of Canberra the national capital. City politicians and bureaucrats cite ‘scientific research’. This version of science now gives cover to national park killings elsewhere.

Politician and media narratives describe the carnage as an essential Australian on- farm and export business. Australian pet owners and meat eaters therefore have had little encouragement to become informed consumers of their national icon.

Time indeed for review of bushmeat sold for human and pet consumption, for regulation as needed, and, most important, a call for renewed respect and co-existence extended to our natural world and to our unique wildlife.

More of the factual background to this editorial can be found and fully explored in Maria Taylor’s new documentary book Injustice, hidden in plain sight the war on Australian nature…
> More at www.mariataylor.com.au

While preparing this September issue of The District Bulletin, two dog food sources crossed our horizon guaranteed not to contain kangaroo and promising good nutrition too. We have made no independent examination of these food products and are not therefore directly recommending them. But they sound very promising as alternatives or additions in the marketplace so we leave it to you to check out if you want to. And the doggie yogurt press release came with not one but two cute photos that we couldn’t resist sharing below.

Available early September and exclusively sold in the chilled pet food section at Woolworths supermarkets, Daily Dollop yogurt is a healthy option to introduce into dogs’ diets and can serve as an addition to daily meals, an easy snack or as a mix-in to spice up dry food.

“Throw it in a slow cooker with a rock and when the rock is tender, throw it away and eat yr boot…”

“I wouldn’t eat that. Eastern maybe, blue flyers yes, but not western greys.”

“Be scratching them worms outa yr ass for days.”

“Don’t the worms die as soon as they hit the cold air?”

“How do you deal with the worms when you feed ur dogs … Boil it first?”

“I only take the younger females to eat. The males go to the dogs.”

“I don’t know anyone who shoots them that eats them.”

“The old worms aren’t dead in the middle there.”

‘If you seen what they like, you wouldn’t eat either.”

“I’ll never eat it again, between the worms and the abcesses, only because I was a roo skinner … that was it for me.”

“I have been around roos my whole life and shot them for years. No way will I eat it.”