The undersigned wish to express our expert opinion on the status of dingoes across Australia in light of the current bushfire emergency. At the time of writing, more than 10 million hectares has been burnt across Australia, including 1.2 million hectares in Victoria and 4.9 million hectares in New South Wales. Across southeastern Australia this represents burning of major dingo habitat zones in National Parks and State Forests. We commend the Federal, NSW and VIC State Governments for their focus on assisting fauna and flora recovery after the catastrophic 2019/2020 bushfire season, however, the proposed ‘feral predator’ aerial baiting plans are counterproductive to that aim. In particular, we wish to express concern about plans to undertake widespread 1080 “wild dog” aerial baiting across burnt habitat in NSW and VIC.

The prevailing wisdom is that introduced predators such as foxes and feral cats pose the most significant risk to native fauna (marsupials, birds, reptiles etc). These risks need to be proactively and swiftly managed to protect (already struggling) threatened species that have been endangered by recent bushfires. We agree that proactive measures to limit introduced predators may need to be taken but these should be targeted and not endanger native predators such as quolls, dingoes and varanids. Currently proposed aerial baiting programs will not target cats, leaving threatened species under increased pressure from these predators. It is also important to iterate that “wild dog” baiting will kill dingoes, leading to widespread mesopredator release, removing suppressive pressure on cat and fox populations exerted by dingoes.

Aerial baiting in bushfire affected southeastern Australia is an unacceptable risk to native carnivores Aerial baiting with 1080 poison poses an unacceptable risk to native predators such as quolls, dingoes and varanids because it is unknown if food scarcity in burnt landscape may increase bait consumption leading to poisoning of quolls or varanids. Furthermore, dingoes are highly susceptible to 1080 baiting and are included as a direct target of “wild dog” baiting efforts. Importantly, best-practice guidelines to limit 1080 baiting impacts on quolls suggests that all baits should be buried to a depth of more than 10 cm and “aerial or broadcast surface baiting should only be used in areas where it can
be demonstrated that there is a low risk to spot-tailed quoll populations” (EPBC Act Policy Statement 3.4 — Significant impact guidelines for the endangered spot-tailed quoll Dasyurus maculatus maculatus (southeastern mainland population) and the use of 1080). Currently it is unknown how quolls and other non-target species will be impacted by aerial baiting in burnt habitat. Arguably, the recently proposed NSW “wildlife and conservation bushfire recovery” plan should be referred to the Federal Environment Minister under the Commonwealth Environment Protection and Biodiversity Conservation Act 1999 for assessment.

We strongly emphasise the ecological importance of terrestrial apex predators in  biodiversity resilience and ecosystem functioning. Dingoes are the sole non-human land-based top predator on the Australian mainland. Their importance to the ecological health and resilience of Australian ecosystems cannot be overstated, from regulating wild herbivore abundance (e.g. various kangaroo species), to reducing the impacts of feral mesopredators (cats, foxes) on native marsupials (Johnson & VanDerWal 2009; Wallach et al. 2010; Letnic et al. 2012; Letnic et al. 2013; Newsome et al. 2015; Morris & Letnic 2017). It would be hypothesised that continued dramatic reduction of dingo populations, by aerial baiting, will enable introduced mesopredators such as foxes and cats to exploit burnt areas unchecked, posing a high risk to threatened native species. The impacts of feral cats and red foxes are likely to be amplified in disturbed ecosystems, such as those burnt by bushfires. Indiscriminate and non-target specific lethal management should not be implemented if there is a risk to the persistence of threatened native fauna or ecosystem resilience.

• Limiting lethal control to targeted methods such as shooting, trapping or ground-baiting where steps are taken to limit non-target bait consumption

… DOWNLOAD DOCUMENT
to continue reading from top p3, (Dingoes have a fundamental …)

What if I want to entice a dingo out into the open to take a photo, and give him a feed. I.E. bait him. What is the definition for ‘bait’? 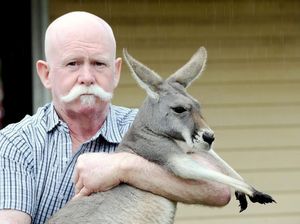 The dingoes’ carcases, including one that was buried in a shallow grave, have been recovered from around the island’s Orchid Beach area since Friday and Queensland Parks and Wildlife Service has launched an investigation into the matter.

The weapon used, it is understood, was sodium monofluoroacetate (1080).

According to animal liberationists the use of this chemical causes a protracted and agonising death but authorities say it is a target-specific poison and its use has become widespread. It is registered in Queensland for the control of wild dogs, feral pigs, rabbits and foxes.

“Each and every one of these dingoes presented with the same pathology that was consistent with poisoning, each one had human-sourced food in its stomach and each one was a young, healthy dog with no other signs of serious injury,” Dr Miles said.

Queensland National Parks Minister Steven Miles said
“The Queensland Parks and Wildlife Service will pursue all avenues in this investigation to establish just what has happened and who is behind these killings.

“Any individuals found to be involved can expect to be pursued to the maximum extent possible under the law.”

Dr Miles said anyone with information should contact police on (07) 4127 9150 or email dingo.ranger@npsr.qld.gov.au.

The maximum penalty for killing dingoes on a protected area is $353,400 or two years’ in jail but in this case other penalties could potentially apply.

Queensland Parks and Wildlife Services regularly kill dingos that behave “aggressively”. The latest incident involved a 19-year-old tourist being bitten on the thigh at the beach at Eurong Township on August 16 last year.  The month before, a woman was bitten on both legs by the same dingo while taking photos on the beach.  The 2013 Fraser Island Dingo Management Strategy Review details that there were up to 100 dingo attacks recorded between 2002 and 2012.

Considering that Fraser Island is the last stronghold of pure Dingoes, it seems that QPWS is more interested in human whims rather than understanding dingo behaviours, and being able to maximise tourism.  More should be done to protect, feed, promote and separate the animal/human contacts.