Environment Minister Lisa Neville said there is no link between the number of permits issued and the number of kangaroos processed for pet food?

Each year, DELWP authorizes the “control” (killing) of kangaroos to reduce damage to landowners.  They claim that all practical, non-lethal control options must be exhausted before authorizing the killing of the animals.

Despite this supposedly exhaustive policy, the number of Eastern Grey kangaroos allowed to be killed in Victoria has more than doubled in the two years the government has permitted the commercial processing of kangaroo meat! Once any form of native animal management becomes a commercial venture, there will be more kangaroos to lethally “manage”.   It’s a self-fulfilling prophesy.

These control permits have no requirement for shooting-skills testing for landholders, nor routine monitoring.  Amateur, or infrequent shooters, are likely to cause tremendous injuries, and suffering, rather than clean, instant killings.

Despite “very, very, strict conditions” of this trial, nobody knows how many kangaroos there are in Victoria, so an expanding pet food trade is assuming inexhaustible supplies of meat!

“I do not accept that kangaroos destroy crops, compete for pasture and destroy the environment; AWPC will prove that it is more financially viable to protect kangaroos, the environment and other species.

“It is very easy to make wild assumptions and put it forward as a fact. I do not accept that kangaroos destroy crops, compete for pasture and destroy the environment. I hear and see these claims all the time, however I never see any evidence (scientific or financial) to prove these claims.

“It is my belief that our wildlife and their habitat bears the brunt of very poor land management practices. Unfortunately it would seem if you have enough money, there is always a way to destroy habitat and wildlife, more commonly known as ATCW permits and Native Vegetation Offsets.”

There are glaring conflicts of interests, in DELWP being the protector of wildlife, administers of the Wildlife Act, and at the same time distributing landholders Authority to Control (“cull”) Wildlife (ATCW) to destroy them. The reason given for giving out ATCWs is because landholders claim that kangaroos can “destroy crops” and cause “economic hardship”.

With commercial interests involved, and the seemingly “pest”-control basis of the ATCWs, more of them are likely to be requested and issued – based on industry and monetary gain from the pet food industry! It then becomes an introduction of a commercial kangaroo meat industry for Victoria, by stealth, something that was denounced by previous governments, and the CSIRO, back in the early 1980s as being unsustainable – due to insufficient animals, and intensive farming.

There is a lack of transparency, and a Review process with stakeholders, to question the validity and thoroughness of the issuing process

How frequently and regularly do site inspectors actually, and exhaustively, advise landholders of alternative measure to avoid lethal controls?

Without wildlife corridors, just how much land is safe, connected and reserved for wildlife, even “common” animals such as kangaroos, numbers can decline – and there are many cases of once common animals becoming extinct?

The Victorian fires in 2008, and since, has claimed the lives of huge numbers of wildlife.

Tragically, thousands of kangaroos and other wildlife are killed or injured in road accidents each year. Kangaroos feed in the early morning and late afternoon at dusk and are often hit when crossing from one part of a grazing area to another on the opposite side of the road. In the years ended 30 June 2015 and 2014 Wildlife Victoria recorded over 6,000 animals hit by vehicles in the state of Victoria with the two preceding years recording 4,655 and 3,801 respectively.

Minister Peter Walsh said that he “did not expect the processing of Victorian kangaroos to lead to any more kangaroos being killed in Victoria, but once there’s monetary gain from the carcasses, there’s no limit to how many landholders will see kangaroos as agricultural “pests” – and have them lethally “managed”.

The number of Eastern Grey kangaroos allowed to be killed in Victoria has more than doubled in the two years the government has permitted the commercial processing of kangaroo meat. (The Age, March 10, 2016) We suggest that this increase is no accident, but motivated by the $1.4 million pet food trade.

Without knowing just how many kangaroos in Victoria at any time, and assuming fluctuations due to climatic conditions, it remains a subjective and arbitrary assessment to what level of killings is sustainable.

With declining numbers of kangaroos in NSW, their interests are in extending the industry to Victoria. 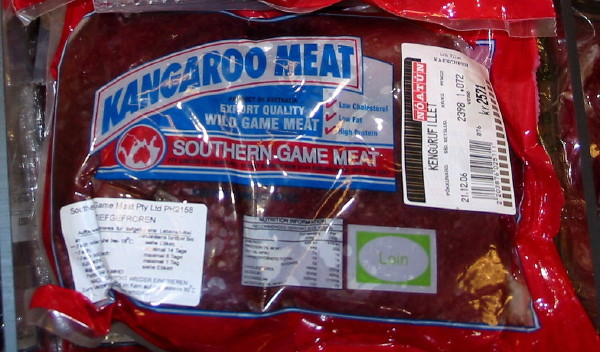 What statistics is this Government basing their figures and their assumption that Victoria is able to sustain the slaughter of up to 70,000 kangaroos each year? Prior to this trial it was accepted that the annual number of Kangaroos shot under permit was around 30,000, but there has never been a comprehensive count of kangaroos in Victoria because the terrain makes it too difficult.

Councils can see an opportunity to add to their coffers, and thus support a “cull”.

Applicants for a ATCW do not pay a fee. The cost falls onto Victorian tax payers. If landholders were required to pay for their permits and numbers issued would be drastically reduced.