Wild lives and broken promises: Why are kangaroos deemed ‘killable’? 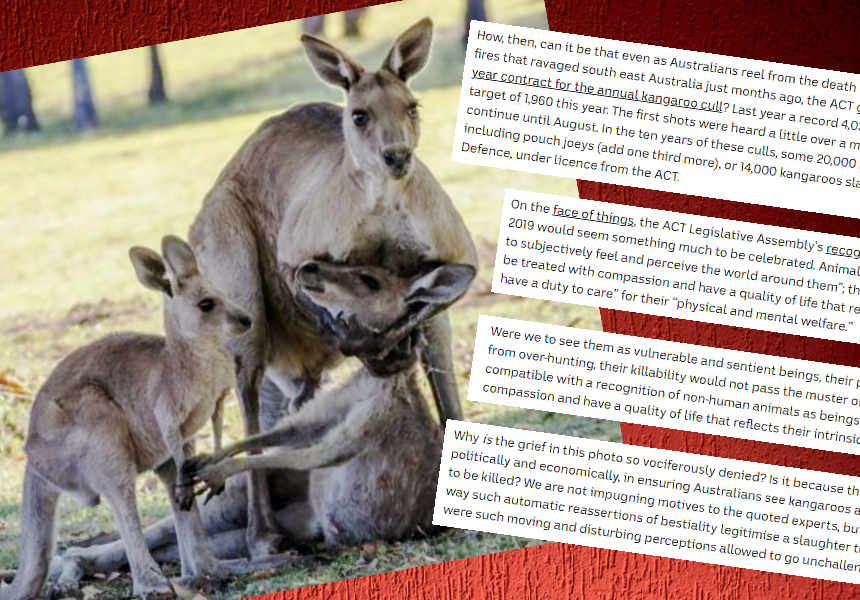 IT IS LIKELY that, since the beginnings of human time, people have known animals think, feel, and suffer. In 1789, Jeremy Bentham famously claimed, “The question is not, Can [animals] reason?, nor Can they talk? but, Can they suffer? Why should the law refuse its protection to any sensitive being?”

Legislation, however, moves slowly. The EU recognised animal sentience only in 1997. Germany, the first European country to enshrine this recognition in its constitution, did so in 2002. Australian governments, so far, haven’t been keen to talk about it.

On the face of things, the ACT Legislative Assembly’s recognition of animal sentience in September 2019 would seem something much to be celebrated. Animals, it states, “are sentient beings … able to subjectively feel and perceive the world around them”; they “have intrinsic value and deserve to be treated with compassion and have a quality of life that reflects their intrinsic value”; “people have a duty to care” for their “physical and mental welfare.”

The Animal Welfare Legislation Amendment Act does many good things — among them reducing the time within which one must report discovery of an injured (suffering) animal, such as an animal one’s had a collision with, from twenty-four hours (during which period most will have died) to two (giving some of them a chance), and the provision of a prison sentence of up to three years for wilfully killing an animal.

How, then, can it be that even as Australians reel from the death of nearly a billion wild lives in the fires that ravaged south east Australia just months ago, the ACT government has just signed a five year contract for the annual kangaroo cull? Last year a record 4,035 kangaroos were shot. There’s a target of 1,960 this year. The first shots were heard a little over a month ago, and the shooting will continue until August. In the ten years of these culls, some 20,000 kangaroos have been killed, not including pouch joeys (add one third more), or 14,000 kangaroos slaughtered by the Department of Defence, under licence from the ACT.

The ACT justifies these culls as maintenance of biodiversity, protection of endangered species (of plants, birds, small reptiles), and protection of biomass from overgrazing. These justifications don’t hold up well to scrutiny: endangered species have been safely sequestered; biomass has survived — so well, sometimes, that cattle have been brought in to graze it down — and documents supposedly supporting the culling have not really done so. In evidence to a 2013 hearing of the ACT Civil and Administrative Services Tribunal, an expert witness previously engaged by the ACT suggested the biodiversity justification was a public relations exercise. In a 2015 letter to The Canberra Times, the minister then responsible conceded the real reason for the cull was Canberra’s relentless expansion into kangaroo habitat. Even the CSIRO has expressed qualms.