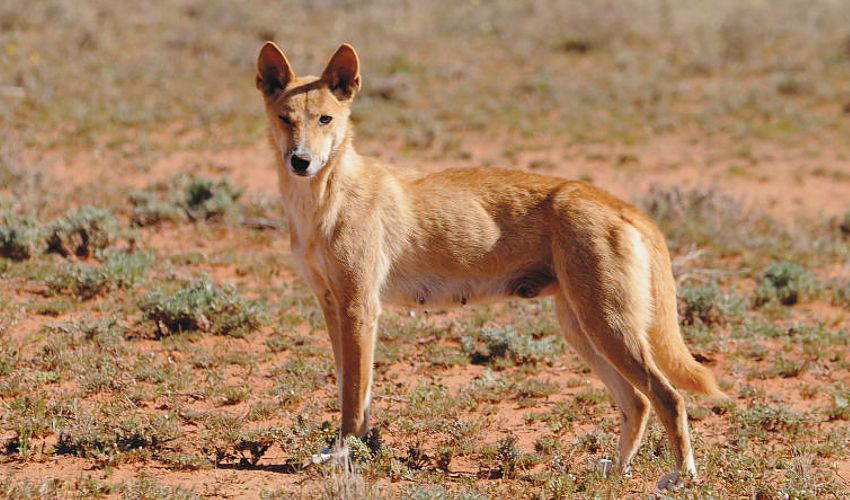 1080 POISON HAS been banned by many countries around the world with very good reason and yet across NSW, our state government continues to saturate our landscapes with this hideous and cruel poison through ground baiting and aerial drops.

1080 poison kills its victims slowly and painfully. It’s a violent, merciless and abhorrent way for any living being to die, and is increasingly killing our family companion animals (dogs) and working dogs and many native species.

“Australia’s native dog, the Dingo, [main image] is a prime target of 1080 poisoning on behalf of sheep farmers. All canine species are targets, including foxes as well as other introduced mammals like pigs that escape into the countryside. State authorities deny more widespread species risk of being poisoned, against all evidence.”

It’s indiscriminate and there is no antidote. Half a teaspoon can kill an adult human — much less a child, and secondary poisoning can and does occur.

The government and agencies like Department of Primary Industries and Local Land Service, and often the local councils, reassure us that 1080 poison is “humane”, and yet they know without any doubt that it’s not. They tell us it’s safe for our environment and native species, and yet authorities are intentionally and wilfully targeting native wallabies in Tasmania with 1080 poison, knowing it kills them and not caring how it kills them.

Recently in SA, 60 sheep died a gruesome death after ingesting 1080 poison and in Victoria a $4,000 fine was imposed by the courts for the illegal and unsafe storage of copious amounts of poisons, including 1080, without a licence. How many sheds across NSW are storing lethal doses of 1080 poison is anyone’s guess, and clearly the ‘regulators’ and government haven’t a clue. Their monitoring and enforcement regimes are seriously lacking.

More and more members of the public are coming forward with distressing personal accounts of finding a much-loved dog dead, or worse, being traumatised after witnessing first hand, the suffering an animal goes through after taking a 1080 bait or experiencing secondary poisoning, including, violent convulsions, vomiting, screaming and absolute sheer terror.

> Related story — 1080 The Nasty Poison: Why do Australians use it?

Some families have lost multiple dogs and all feel helpless trying to ease the suffering of their dog or dogs by rushing them to a vet — often too far away with many dying in agony in transit.  Can we even begin to imagine such an experience or how a child would ever recover bearing witness to watching their family friend suffer and die this way.

The NSW Minister for Agriculture and Western NSW, Adam Marshall, who has a clear conflict of interest also overseeing animal welfare, often supports these 1080 baiting programs, and yet he claims to be an animal lover. This is the same National Party minister who has continued to fail the welfare of all NSW animals in spectacular fashion.

With the stroke of a LNP privileged pen, Mr Marshall continues to unleash successive lethal 1080 baiting programs using millions of dollars in public money — without consulting the public. The most recent NSW 1080 baiting program includes an area the size of Russia. Think about that.

Recent devastating flooding saw homes, caravans, boats and many animals swept across the landscape and ending up a long way from their original locations. Think about how easily and widespread 1080 baits have also spread across the NSW landscape in these floods, and whether your drinking water catchment or your family is still safe.

Our government knows poisons like 1080 are ineffective population control — they don’t work, and have been proven to fail which is precisely why they continue to use this odourless and colourless poison year after year and decade after decade — with your public money. The same old lethal programs, political rhetoric and verbal excuses continue because it suits political policy directions, and because it’s cheap.

Reach out and say enough

If, like many Australians, you are concerned and feel compelled to become part of a local solution, please reach out and contact me at info@ban1080.org.au.

More information about the dangers of 1080 poison can be found on the Coalition of Australians Against 1080 Poison facebook page and website.

Ed note: We are informed that Victoria is gearing up to increase its 1080 poisoning with a parallel state-wide campaign.

— Lisa J Ryan wrote on behalf of the Coalition of Australians Against 1080 Poison.